Researchers at University of Twente reveal early signs of disease; technique could be adapted for surgical use in vivo. 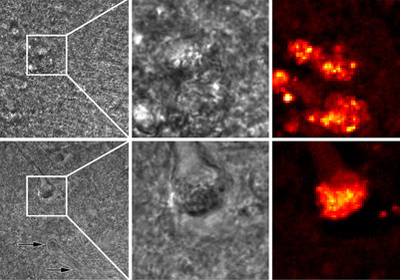 Scientists at the University of Twente, Netherlands, have produced images of brain tissue affected by Alzheimer’s disease. Produced using a Raman optical technique, the images show the areas around the core affected part and reveal healthy tissue starting to undergo transition.

Raman microscopy uses a laser beam for the detection of chemical substances. The researchers led by Cees Otto, of the Medical Cell Biophysics group at UT have studied the brain tissue of four brain donors, three of them with Alzheimer’s disease.

Alzheimer’s disease is associated with areas of high protein concentration in brain tissue; form variations called plaques and tangles. Raman imaging can create sharp images of these affected areas. The scientists, whose work has just been published in Nature Scientific Reports, comment, “This is an attractive technique, because it shows more than the specific proteins involved. The presence of water and lipids, influenced by protein presence, can also be detected.”

The team says that the affected area is presented “in a sharp and clear way”. After image processing, an area in transition between healthy and affected state can be shown: this capability could give an indication how the disease spreads in the brain. Furthermore, even in the brain tissue of the healthy person, a small area is detected showing “protein activity”, which the team says can be the first sign of a neurodegenerative disease.

The Twente technique works as follows: the energy of the reflected and scattered light gives an indication of the substances present in a sample. In each of the four brain samples, 4096 spectra were examined. Otto commented, “In chemical analysis, Raman analysis has proven to be a powerful technique. A major advantage of the Raman approach is that the chemicals don’t need a pretreatment, so it is label free.”

So far, this Raman method has been used to examine brain tissue outside the body, but the scientists say it could even be used in vivo for detecting specific areas of interest during surgery. They comment, “Compared to MRI, PET and CT imaging, Raman is able to detect areas, smaller than cells, with very high precision.”

”It could be a very valuable extra technique. The Raman images now show protein activity at neural cell level, but the sensitivity is high enough for detecting areas that are even smaller – as is the case with the brain sample of the healthy person.” 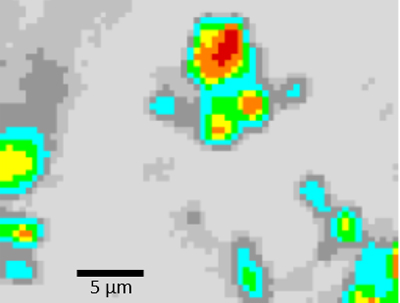 “A spatial resolution of 0.47 µm and quantification of main tissue components such as proteins, lipids, water and β-sheets conformation allow their co-localization and evaluation of the molecular changes during plaque and tangle formation.

“Our fast hyperspectral Raman imaging with a dwell time of 50 ms/pixel can be considered in general as a valuable tool for identification of lesions in pathological tissues characterized by storage of macromolecules with specific molecular characteristics. The study also revealed that fluorescence emission of unknown endogenous fluorophores correlates with the observable changes at the locations of the plaques and tangles.”