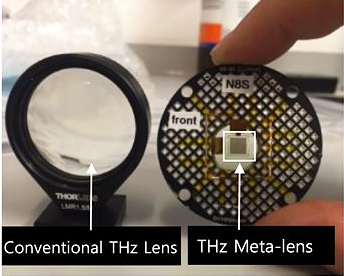 Credit card-thick, flat lenses with tunable features based on graphene and gold have been developed by a partnership of Korean- and UK-based researchers. They say that such optical devices “could become optical components for advanced applications, such as amplitude-tunable lenses, lasers (so-called vortex phase plates), and dynamic holography.”

The scientists work at the Center for Integrated Nanostructure Physics, in the Institute for Basic Science, the Korea Advanced Institute of Science and Technology and the University of Birmingham. The work has been published in Advanced Optical Materials.

The paper describes the properties of a newly-developed metasurface (a 2D material that can control the electric and magnetic components of light and direct them as wanted) which works as a convex lens. It is made of a gold sheet pierced with micrometer-sized U-shaped holes and covered with graphene.

The researchers have achieved a conversion rate of 35%. They comment that converting circular polarization could be useful in a number of fields, for example biosensing and telecommunications. To be able to control a range of optical properties, the scientists took advantage of graphene’s unique electronic features and used them to tune the output beam’s intensity or amplitude. The scientists liken graphene’s function to the exposure operation of a camera. 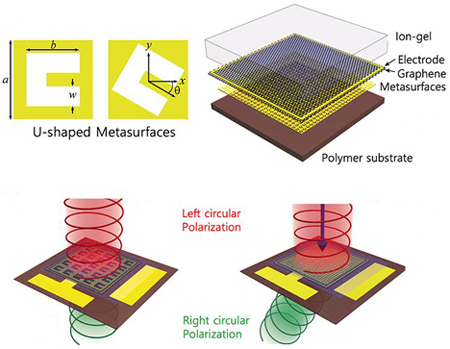 In the case of the camera, a mechanical control allows a certain shutter’s opening time and size to determine the amount of light entering the instrument. The metalens instead regulates exposure via an electric tension applied to the graphene sheet, without the need for bulky components. When voltage is applied to the graphene layer, the output beam becomes weaker.

The metalenses were designed specifically for terahertz radiation. This radiation can pass through some materials such as fabrics and plastics, but at a shorter depth than microwave radiation. For this reason it is employed for surveillance and security screening.

Kim added, “While conventional optical lenses have a thickness of several centimeters to several millimeters, this metalens is just a few tens of micrometers thick. The intensity of the focused light can be effectively controlled and it could find useful applications in ultra-small optical instruments.”