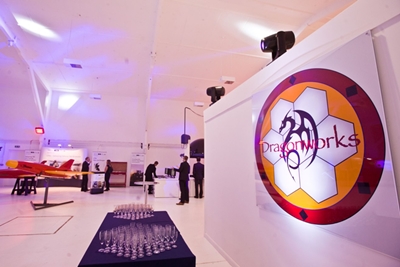 Called “Dragonworks”, the test bed is said to be for high-energy lasers aimed at both military and commercial applications. QinetiQ is one of the key partners involved in the “Dragonfire” consortium, which is working on a £30 million project to develop a laser weapon and is led by arms firm MBDA Systems.

Reflection tests
QinetiQ says that the Farnborough site includes a cleanroom to enable contaminant-free work with sensitive optical equipment. It also features what is described as the UK’s only Reflective Hazard Assessment Tool (RHAT) - designed to examine how laser energy is reflected from different surfaces.

“Further additions to the building over the coming months will create an environment in which customers can conduct full-scale testing of high-energy lasers,” states the firm, which expects to begin building the Dragonfire weapon’s laser source after key components arrive at the site in early 2018.

“It will help our customers to understand the opportunities and challenges associated with this disruptive technology, informing their critical strategic and tactical decisions,” he said. “We are investing in this asset as part of our strategy to modernize the UK’s test and evaluation services, which will ensure our customers can keep pace with rapid technological advances and maintain their competitive edge.”

Project partners
The Dragonfire project is the first to be undertaken at Dragonworks. Once the coherently combined fiber laser source for the weapon is built and refined in the Farnborough cleanroom it will be integrated with a beam director developed by consortium partner Leonardo.

“The project will culminate in operation at full-power under test conditions inside the facility in summer 2018, before it is transported to MOD Shoeburyness for long-range outdoor trials later in the year,” states QinetiQ. “Data collected using the RHAT will inform the safety case for these and future trials, ensuring the reflectivity of targets is fully understood and any risk mitigated accordingly.”

Dragonworks and associated projects are currently said to support 27 full-time jobs at QinetiQ, with additional expertise provided by more than 50 of the company’s scientists and engineers. Other Dragonfire consortium members include defense contractor BAE Systems, procurement specialist Arke, and aerospace firm Marshall ADG - with several UK-based SMEs also said to be involved.

Announced in early 2017, the project is intended to “mature” the key technologies needed for an effective high-energy defensive laser weapon system, with the aim of engaging representative targets on land and at sea during 2019.

“This will provide the body of evidence for future procurement decisions alongside developing UK industrial capability and know-how,” says QinetiQ. A shell turret design for the weapon was shown off during September’s Defense and Security Equipment International (DESI) trade show, held in London.

The system under development will represent the UK’s first high-energy laser weapon, although MBDA has been closely involved in a similar project in Germany that used fiber lasers from IPG Photonics to destroy towed shells in a test scenario with a 40 kW prototype weapon.

Coherent beam combining
The vision of the UK’s Defence Science and Technology Laboratory (DSTL), which is overseeing the Dragonfire project, is to establish a new laser capability demonstrator program, providing an “end-to-end system demonstration” from target acquisition to destruction.

“We are the only UK company to successfully and safely operate a high-energy laser weapon in the UK,” states QinetiQ in its case study on the project. “Our team has direct experience of high-power fiber lasers and therefore a clear understanding of the requirements that will be placed upon the fundamental optical sources for the Laser Directed Energy Weapon.”

The optical system is said to be based around coherent beam-combining technology, which it believes is superior to alternative approaches in terms of long-distance collimation through turbulent media, and in the longer term will support scaling towards higher-power systems ultimately suitable for land, sea, and air deployments.

“Using our design for a coherently combined fiber laser, and the associated phase control system, we will provide a precision laser source that can be directed onto a dynamic target and achieve an enhanced power density on a target in the presence of turbulence,” QinetiQ adds. “This expertise has been developed over many years in partnership with the UK MOD.”