The higher power LED technology for sterilization and curing has been advanced by two years, claims the company. 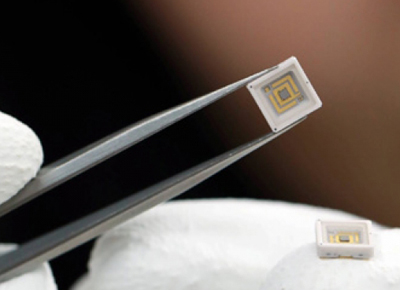 Korean components and technical materials supplier LG Innotek has developed what it calls the world's first 100mW UV-C LED. The company claims that this development is “two years ahead of the industry’s forecast that predicted its development would be successful by 2020”.

UV-C radiation is ultraviolet light with wavelengths of between 200 to 280nm, also known as Deep UV. It is used in sterilizing applications and for hardening or curing materials with its ability to destroy bacterial DNA and cause chemical reactions within certain materials such as inks, coatings or polymers . LG Innotek's 100mW LED emits UV at 278nm.

Such LEDs will achieve a more powerful sterilizing effect with higher power output, but previously it has been difficult to obtain a stable quality in such products due to the byproduct of heat.

The developer has overcome the existing technological limit by refining the epitaxial structure and the vertical chip technology to maximize light extraction. Ultraviolet output is boosted and the waste heat is discharged effectively, ensuring stable performance. The company’s announcement states: “One 100mW UV-C LED can emit strong sterilization ultraviolet light for more than 10,000 hours”.

Conventional UV-C LEDs with a light output level of 1 to 2mW are mostly used for portable sterilizers or small household appliances. Due to their weak UV-C power, their scope of application is limited. LG Innotek adds that with its new source it can expand the application fields of UV-C LEDs. As the product can rapidly sterilize flowing water and even air, it could be used in a wide array of household appliances from water and air purifiers to air conditioning systems for buildings and automobiles.

The company stated that it has discussed development of a variety of products based on its new UV-C LED with several other global manufacturers, because it believes that the demand for high-output LEDs is continuing to grow: “It is expected that the demand for 100mW UV-C LEDs will also increase rapidly,” said the LG Innotek press release.

The company intends to accelerate its share of the UV LED market, stating, “Our quality competitiveness has been proven by the launch of innovative products such as the LED module for sterilizing water and the UV LED sterilizer for escalator handrails.”