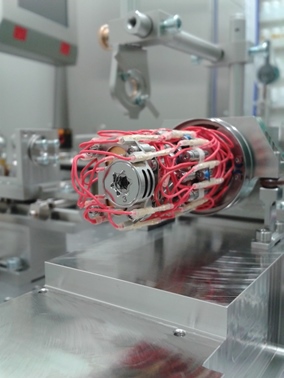 An ultra-compact diode-pumped solid-state (DPSS) ultraviolet laser head developed by a team at Laser Zentrum Hannover (LZH) has been delivered for integration into analytical equipment destined for Mars.

Scheduled to launch in three years, ahead of a nine-month journey, the ExoMars2020 mission will carry a state-of-the-art rover to the red planet’s surface.

Among the many instruments on board will be a laser desorption mass spectrometer (LDMS) capable of identifying relatively large organic compounds – some of which may indicate past or present extra-terrestrial life.

Peter Wessels, who leads the LZH solid-state lasers group, says that the frequency-quadrupled 266 nm laser head is optimized for the harsh Martian conditions and the long trip, as well as weighing just 220 g and being only 20 cm long.

“We use a passively Q-switched Nd:YAG oscillator pumped longitudinally over an optical fiber,” he said of the source, which features a pulse energy adjustable to 130 µJ. Nonlinear crystal optics up-convert the fundamental 1064 nm laser frequency to the ultraviolet wavelength needed for LDMS.

Germany-based commercial partner Laseroptik provided the optics, which feature space-qualified coatings, and the laser head is now being integrated with the mass spectrometer system at NASA’s Goddard Space Flight Center.

After more tests, it will be sent back to Europe for integration into the rover vehicle ahead of the planned launch in 2020.

Boreholes
Assuming a safe landing - not a formality when considering the historic success rate of Martian missions - the rover will search for well-preserved organic material, particularly from the very early history of the planet.

An on-board drill is designed to extract samples from as deep as two meters, with an infrared spectrometer used to characterise the mineralogy in the borehole. Once collected, samples will be delivered to the rover’s analytical laboratory for mineralogical and chemical identification, with the identification of organic substances said to be of particular interest.

That is where the LDMS kit comes in. Alongside a gas chromatography mass spectrometry (GCMS) system, it forms part of an instrument known as the Mars Organic Molecule Analyzer (MOMA), which is designed to answer questions about the potential origin, evolution and distribution of life on Mars.

The LDMS will be used to study larger and less volatile molecules that would not be easily vaporized into the GCMS kit, with the UV source acting to ionize the molecules.

Other photonics kit on board the rover will include a "PanCam" panoramic camera and close-up imager, the "ISEM" infrared spectrometer to aid sample selection, the drill-embedded multispectral imager, a visible/IR imaging spectrometer for mineralogy, and Raman kit to identify organic pigments.