18-mirror space telescope ready to be shipped to California and integrated with spacecraft ahead of 2019 launch. 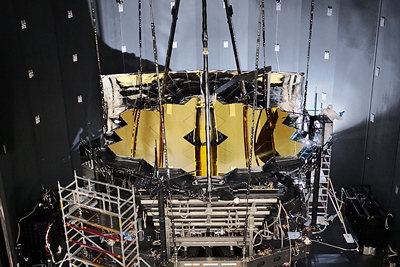 Following more than three months of environmental, thermal and optical testing, the James Webb Space Telescope (JWST) is said to be ready for shipment to California, ahead of its integration with a spacecraft and planned launch in 2019.

Since July 10, scientists and engineers from NASA’s Johnson Space Center and Harris Corporation have been putting the 18-mirror instrument through its paces by simulating the vacuum and extreme cold that JWST will experience in space.

The tests also included an alignment check of the 18 gold-plated, hexagonal segments that make up the primary collector optic, with the Harris team developing a multi-wavelength interferometer system to verify optical quality and placement of each mirror element.

Surviving Harvey
JWST project manager Bill Ochs said in a NASA release: “After 15 years of planning, chamber refurbishment, hundreds of hours of risk-reduction testing, the dedication of more than 100 individuals through more than 90 days of testing, and surviving Hurricane Harvey, the OTIS [optical telescope and integrated science instrument module] cryogenic test has been an outstanding success.”

The tests in Houston are said to have continued even as Hurricane Harvey slammed into Texas in late August and inundated the city with flood waters. Although the Johnson Space Center (JSC) in Houston was closed to most employees and visitors through September 5, the JWST tests were able to continue - while members of the team also volunteered for the wider clear-up effort and distribution of food and drink to those affected by the giant storm.

The tests appear to have been a complete success, with JSC test project manager Jonathan Homan commenting: “With an integrated team from all corners of the country, we were able to create deep space in our chamber and confirm that Webb can perform flawlessly as it observes the coldest corners of the universe.”

Homan added: “I expect [Webb] to be successful, as it journeys to Lagrange point 2 [after launch] and explores the origins of solar systems, galaxies, and has the chance to change our understanding of our universe.”

Mid-infrared instrument
While inside the locked test chamber, engineers monitored JWST with thermal sensors and specialized camera systems, checking the telescope’s temperature and tracking the physical motion of its various components during the cool-down procedure.

JWST features a mid-infrared instrument (MIRI) that will be used to peer into deep space across the 5-28 µm wavelength range, and because it is highly sensitive to the thermal background requires an additional cryo-cooler to maintain an even lower temperature (just 7K) than the rest of the telescope’s instruments.

Following the anticipated launch from French Guiana now scheduled for spring 2019, MIRI will observe the highly red-shifted light from very earliest and most distant galaxies, as well as much nearer but fainter comets, objects in the Kuiper belt outside our own solar system, and proto-planetary dust swirls.

To do that, MIRI is fitted with three arsenic-doped silicon detector arrays, with a pulse tube pre-cooler and a Joule-Thomson Loop heat exchanger to reach the 7 K operating temperature.

The next stage for JWST will see the equipment shipped to California for integration with the host spacecraft that will ultimately carry the telescope into orbit. Its final destination will be the “L2” Lagrange point, around a million miles from Earth but in an orbit that – along with its five-layered sunshield – will protect JWST from the light and heat of the Sun and enable it to pick up weak mid-infrared signals.

The L2 position also means that, unlike Hubble, which goes in and out of Earth’s shadow every 90 minutes, Webb will have an unimpeded view of the cosmos and be able to perform scientific operations continuously.