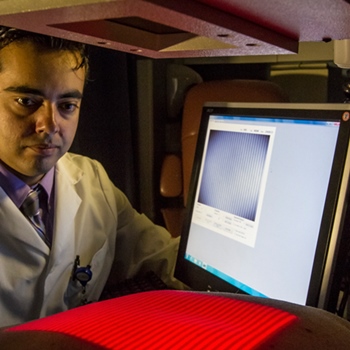 Modulated Imaging, a 2008 spin-out from University of California, Irvine, that is developing medical imaging technology based around structured light illumination, says it has raised $2.9 million in a series A round of venture funding.

Backed by the investment wings of Japan’s Hamamatsu Photonics and Mitsubishi, alongside Grey Sky Venture Partners and Fresenius Medical Care Ventures, the company is aiming to target a range of medical, aesthetic and research applications with a technique called spatial frequency domain imaging (SFDI).

A key potential application of SFDI is identifying diabetes patients likely to develop foot ulcers resulting from poor vascular circulation – side-effects that often go undiagnosed until expensive treatment, and in some cases even amputation, is necessary.

In addition to the venture funding, the company said it also received a $1.2 million “commercialization readiness” grant from the National Institute of Arthritis and Musculoskeletal and Skin Diseases (NIAMS), part of the US National Institutes of Health (NIH).

According to a US Securities & Exchange Commission (SEC) filing in August, the company had been seeking up to $4 million in equity finance.

Vascular lesions
David Cuccia, whose UC Irvine research forms the basis of the SFDI technique, is both CEO and CTO of Modulated Imaging. He said in a company announcement: “This infusion of funds allows us to take our imaging technology to the next level, supporting key clinical studies and the development of our next-generation Ox-Imager technology.

“We appreciate the enthusiasm and support from Grey Sky, Mitsubishi, Fresenius Medical Care, and Hamamatsu, as well as from the clinical community. We will continue to build upon our unique approach to resolving an unmet medical need, and providing meaningful information that advances patients' health and wellness.”

Modulated Imaging announced earlier this year that the US Food & Drug Administration (FDA) had approved its Ox-Imager CS product, which is designed to help diagnose lower-limb vascular issues such as diabetic foot ulcers.

On its web site, the company explains that the SFDI technique is able to identify the likely onset of these potentially dangerous lesions, before they actually develop. “Poor peripheral circulation coupled with poor foot care can cause an onset of diabetic foot ulcers,” it says. “These ulcers are painful, difficult to heal, and can lead to amputation.”

Patients with diabetes often do not realize that they have a problem until the ulceration has reached a critical stage, adds the firm. “Our technology can measure peripheral perfusion, and allow primary care doctors to screen subjects and prescribe preventative measures prior to ulcer formation.”

Cuccia, who says that the approach could potentially save more than $6 billion in ulcer treatment annually, added that clinical studies already taking place in California and Arizona will now expand to other locations. A miniaturized version of the Ox-Imager CS system is also under development, and work on that is set to accelerate thanks to the latest venture cash.

Tissue oxygenation
The SFDI approach, initially developed through a series of small business innovation research (SBIR) grant awards, works by measuring tissue oxygenation saturation from oxy- and deoxy-hemoglobin levels, which are in turn determined according to their relative absorption and reflection of different wavelengths.

Originally housed within UC Irvine’s “Photonic Incubator”, in 2014 the expanding company moved to its first commercial space in San Juan Capistrano, but quickly outgrew that location as well and now operates out of a 6000 square foot building in Irvine.

Hamamatsu Photonics researcher Mitsuharu Miwa, said to be a pioneer in perfusion imaging, said in the company’s latest announcement:

“Hamamatsu Photonics has invested in Modulated Imaging once again due to its innovative work with photonics to improve human health. Modulated Imaging’s technology is very much in sync with Hamamatsu’s own development of optical imaging for medicine, so it is an ideal relationship.”