Giant new Osram LED fab up and running in Malaysia 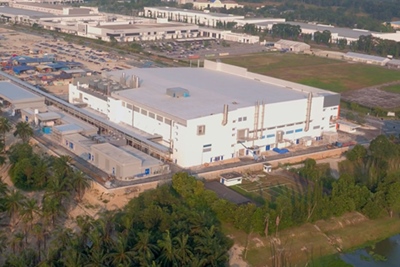 Osram says its new €370 million LED production site in Kulim, Malaysia, has started operations on time – almost exactly two years after the lighting giant spooked investors by saying that it would invest up to €1 billion to expand capacity there.

“We are both on schedule and within budget,” boasted Osram CEO Olaf Berlien during the new site’s official opening ceremony last week, adding that with the company’s LED business growing at a rate of nearly 20 per cent the additional capacity will quickly prove beneficial.

“Our investment in Kulim also attests to the technology shift and our transition to becoming a high-tech corporation,” Berlien said. “At the beginning of this decade, conventional lighting still accounted for 80 per cent of Osram's business. Today, two-thirds of our sales are based on optical semiconductors.”

Osram first revealed the Kulim expansion plans, as part of its “Diamond” growth initiative, during its November 2015 full-year results release. At the time, some investors appeared surprised by what they considered to be a risky move – with Osram’s stock price dropping in value by 30 per cent as a result.

But while it took more than a year for the stock price to recover, Osram’s market value has since risen sharply. Trading at around €71 on the Frankfurt stock exchange on November 27, it compared with around €38 immediately following the November 2015 announcement.

Significant further expansion is possible in Kulim if required. Osram says that it has invested €370 million during the first of up to three stages of building that would together represent a total spend of around €1 billion.

In a statement from the firm Aldo Kamper, CEO of Osram’s Opto Semiconductors business unit and also president of the Photonics21 representative group in Europe, emphasized the huge production capacity now on tap in Malaysia.

“With one week’s production we could completely retrofit the street lighting of the metropolises New York, Rio, Hong Kong and Berlin with LEDs,” Kamper said.