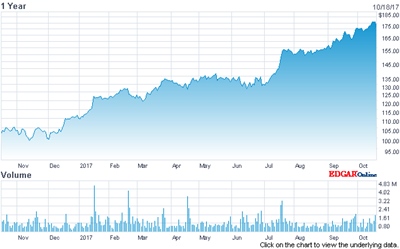 ASML has posted another sharp increase in sales, as the current boom in demand for its various types of lithography equipment shows little sign of abating.

Revenue recognition for one more extreme ultraviolet (EUV) lithography tool than previously expected helped push revenues in the third quarter of the year to €2.45 billion – a little higher than prior expectations and up 35 per cent year-on-year.

Quarterly net income of €557 million was closer to the predicted level, with ASML making less profit on its initial EUV tool shipments than it does on its much more mature deep-UV (DUV) stepper systems.

Record annual sales
With three EUV systems shipped in the quarter, bringing the year-so-far total to six – and another six expected to ship before the end of 2017 – the Veldhoven, Netherlands, semiconductor manufacturing equipment company is on track to post record annual sales of around €8.6 billion.

That would represent a 25 per cent jump from the record-breaking total of €6.8 billion set in 2016, and while ASML’s executives are reluctant to put a figure on 2018 expectations right now, they suggest that industry fundamentals continue to look good, with the promise of a ramp in EUV revenues as annual tool shipments increase to 20 units next year.

Although no new orders for EUV equipment were received in the latest quarter, CFO Wolfgang Nickl said while order intake remained “a bit lumpy”, he was confident that additional orders would come in before the end of this year.

EUV tools are currently being readied by chip makers, with the move to volume production pencilled in for the end of next year and start of 2019. At present, ASML is expecting to ship upwards of 30 EUV systems in 2019, although Nickl indicated that there would be scope to increase that number if necessary.

Some 45 per cent of ASML’s current €5.7 billion sales backlog – equivalent to around €2.57 billion – relates directly to EUV equipment, with each of the highly complex tools commanding a selling price in excess of €100 million.

EUV ecosystem progress
ASML says that it recently conducted a power capability test with its EUV pellicle technology, which is used to protect the mask from particles during wafer exposure, and showed that the current design can withstand 250 W of EUV power – the output seen as necessary for high-throughput economic wafer patterning.

The company has also shipped the first product to be co-developed with electron-beam equipment company HMI, which ASML acquired last year. The “ePfm5” pattern metrology tool will be used to detect wafer defects for sub-10 nm feature size processing – a level where optical inspection has so far been found wanting.

Nickl described the launch of the tool, which combines electron-beam and computational lithography expertise, as “very significant”, as it helps to complete the wider EUV “ecosystem” needed for the technology to succeed.

Ultimately, it should help chip makers achieve higher wafer yields, once they begin to use EUV equipment to pattern critical layers in their forthcoming device designs.

Meanwhile, memory chip manufacturers in particular continue to place large orders for ASML's DUV lithography equipment. In the latest quarter, memory makers accounted for fully 77 per cent of the €2.15 billion received in new bookings. That total new bookings figure was down slightly on the prior quarter, reflecting in part the absence of new EUV activity.

• ASML’s stock price retreated from recent record highs following the latest earnings release, dropping in value by 3 per cent to trade at around $170 on the Nasdaq exchange in early trading on October 18.

However, the stock is still up by 50 per cent from the start of this year, and continues to command a market capitalization in excess of $70 billion.