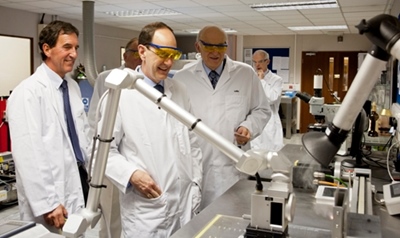 Austrian private equity investment group CMR has completed its purchase of the former Rofin-Sinar CO2 laser division based in Hull, UK, from Coherent.

The Californian laser giant, which acquired the Rofin-Sinar business last year in a deal valued at more than $900 million, was forced to divest the division - known as Rofin-Sinar UK - as part of the European Commission’s (EC) approval process.

According to sources at Rofin-Sinar UK, the Hull business is currently generating a net profit margin in excess of 20 per cent, on annual turnover of approximately $40 million*.

The value of goodwill allocated to the business, which specializes in low-power CO2 sources, was recently re-evaluated by Coherent, including the write-down of a $1.2 million impairment charge.

While the value of the transaction with CMR has not been released, as of July 1 the UK unit was judged to have total current assets worth around $32.6 million, against current liabilities of $7.6 million.

Iradion connection
According to a release issued by the legal firms advising CMR on the deal, the former Rofin division (referred to as RSUK) was required to be sold by the EC to ensure that a dominant market position was avoided.

“Both companies are specialists in the development and manufacturing of CO2 laser sources. The now combined product portfolios cover a wide range of CO2 lasers with low-power levels up to 1 kW.”

Based in Rhode Island, US, Iradion specializes in ceramic cores for CO2 lasers, which it claims have significant advantages over the more conventional metal-tube design that reacts with the gas mixture used.

The ceramic tube also holds the laser’s resonator optics, and its lower thermal expansion compared with metal is said to result in greater laser stability and a compact design. According to the firm’s web site, Iradion currently offers RF-excited lasers with output powers ranging from 30 W to 250 W.

While its main output has been CO2 sources, back in 2013 Rofin-Sinar UK attracted government support for a £5 million project to develop a high-power picosecond laser operating at green wavelengths for advanced industrial applications including glass cutting.

Rofin-Sinar UK has indicated the hook-up with Iradion will see business continue "as usual", with the likelihood of more manufacturing activity and additional jobs created at the Hull facility.

* updated (October 18): The turnover and profitability details for Rofin-Sinar UK have been amended from the initial version of this article, which quoted incorrect figures.