The company's Ultivue-2 system is a reagent-based platform for super-resolution microscopy. 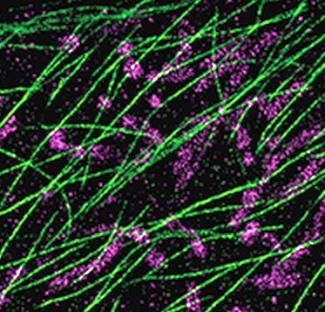 Ultivue, a Massachusetts-based developer of imaging kits for use in biomedical analysis and microscopy, recently unveiled its first commercial product at the Society for Neuroscience conference in San Diego.

The Ultivue-2 kit for super-resolution microscopy is intended to allow users to image cellular proteins at a spatial resolution of around 20 nanometers, but be much simpler to implement for each protein than more demanding super-resolution techniques such as PALM and STORM.

"Super-resolution microscopy is a high-performance life science tool that has until now been accessible only to research groups with expertise in, and dedicated equipment for, optical biophysics,” said Ultivue CEO Michael Natan at the launch. "Ultivue's proprietary DNA-PAINT technology, as incorporated into Ultivue-2, dramatically simplifies the effort required to generate super resolution data. It is also compatible with a wide variety of research fluorescence microscopes."

Ultivue was spun-out from Harvard's Wyss Institute for Biologically Inspired Engineering in 2015, supported by $5 million in Series A funding, to develop reagent-based technologies designed to allow super-resolution imaging of multiple species on standard fluorescent microscopes using low cost materials. The technology is based on IP and patents licensed from the Wyss Institute and Caltech.

In use, DNA-PAINT (from Point Accumulation for Imaging in Nanoscale Topography) allows single-molecule localization by employing short complementary DNA strands - one attached to a target through an antibody, and the complementary strand attached directly to a fluorophore.

Both strands hybridize over a short period of time, a pairing operation which turns on and off the fluorescence emanating from the target. These 'blinking' events can be recorded as a movie, which is subsequently processed into a super-resolution image.

A transient DNA interaction typically results in localization of the fluorescent targets with much higher precision than would be possible by other means, according to Ultivue. Using different DNA sequences to label distinct targets, and applying the "imager" strands to one target at a time, allows many distinct targets to be imaged sequentially using only one dye and one laser source. This variant of the technique, christened Exchange-PAINT, lends itself to a multiplexing operation that can visualize ten, and potentially up to 100, different molecular species.

Since Ultivue-2 relies on a constant replenishment of fluorescent dyes, it avoids the detrimental effects of photobleaching, and allows users to interrogate a larger sample area in all three dimensions.

"The technology alleviates particular pain-points in super-resolution microscopy, by requiring lower laser power and less strenuous sample and buffer preparation," commented Levy. "In addition, the DNA strands can be lengthened to accommodate stable binding and dehybridized at any time with a proprietary buffer, allowing for high multiplexing at standard-resolution microscopy in cell and tissue samples."

Ultivue is marketing the system as a two-plex secondary antibody-based kit allowing an average of 25 two-color super-resolution experiments priced at $750, and intends to use DNA-PAINT and Exchange-PAINT as its defining technologies to develop a portfolio of multiplexed super-resolution-enabling and enhancing products.