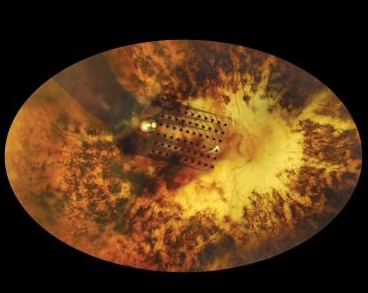 The “Argus II” implants, which are able to restore a very basic level of vision to people blinded by the condition Retinitis Pigmentosa (RP), have been tested in a series of clinical trials, and were approved by the US Food & Drug Administration (FDA) in 2013 and European health authorities in 2011.

Surgeons at London’s Moorfields Eye Hospital and Manchester’s Royal Eye Hospital will carry out the procedures, along with follow-up, rehabilitation and support from Second Sight.

NHS England is funding the through its “Commissioning through Evaluation” scheme, which is designed to gather evidence for treatments showing significant promise for the future. “NHS England will assess how the bionic eye helps patients function with everyday tasks,” announced the health authority. A similar effort is already under way in France.

Christmas lights
Argus II works by by-passing the photoreceptors that are irreparably damaged in patients with RP. Instead, their still-healthy ganglions – cells that transmit visual information along the optic nerve – are stimulated through the combination of an epiretinal implant and a camera mounted onto a special pair of glasses.

Although it does not restore anything approaching full vision, one UK patient fitted with the prosthetic 25 years after being blinded by RP says that he is able to “see” twinkling Christmas lights and people approaching.

Second Sight CEO Will McGuire said that the NHS England decision represented a “major milestone” for the company. While other retinal implants are available, the Nasdaq-listed Californian firm claims that the Argus II has demonstrated better long-term benefits for RP sufferers, some of whom have used the implant for several years.

Earlier this year Second Sight said that follow-up tests on 30 blind patients to receive Argus II implants showed that their improved visual function was sustained over a five-year period.

McGuire added: “NHS England is known to be under significant financial pressure and also extremely selective in adopting innovative technologies - which must demonstrate sufficient value for money. We expect that this decision will be observed throughout the world by other healthcare agencies.”

Life-changing
One of the key surgeons involved in the Argus II work, Professor Paulo Stanga from Manchester’s Royal Eye Hospital said: “I have seen first-hand how beneficial and life changing this technology has been to RP patients who are completely blind.

“We live in a visual world, so it is reassuring and life affirming for a person who is completely blind to regain some basic vision. This is a wonderful decision. For patients' families, it is also a life-enhancing treatment, because it can mean less dependence for their loved ones.”

Moorfields consultant retinal surgeon Professor Lyndon da Cruz added: "Perhaps most exciting is the potential ability of the Argus II to increase patients' functional vision. With the Argus II, some patients can perform tasks that would not be possible without the device.

“Our work at Moorfields has shown that these changes last for many years after implantation for some patients and represent a stable, effective treatment for them.”

Last month the company posted a net loss of $8.5 million for the third quarter of 2016, bringing total losses for the year so far to nearly $23 million on sales of only $3.3 million – significantly worse than for the first nine months of 2015.

That’s partly because of a lower reimbursement rate via the Medicare and Medicaid healthcare systems used in the US. On the plus side, a new Medicare outpatient rate of $150,000 for the implant and associated surgery is set to come into effect in the new year – something that CEO McGuire believes will prove to be a positive development.

“In addition, as we evolve our commercialization strategy in the US, we are creating Centers of Excellence (COE) that are committed to ensuring competence in patient screening, post-surgery programming and rehabilitation,” he added.

Second Sight’s research and development team is also working on a more advanced implant for other forms of blindness. Called “Orion I”, it has so far been tested on animals and the first human trial is expected to take place within six months.

But despite those positive developments, investors will have been disappointed by the financial performance of the company so far. After listing at the IPO price of $9 per share, Second Sight’s stock enjoyed a short-term bounce but is now trading at around only $2.