$22M round 'will bring augmented reality optics to market' 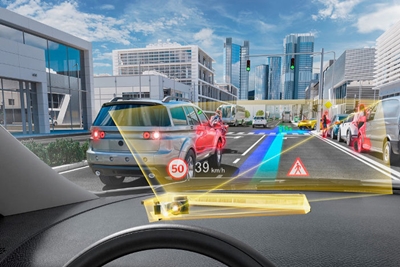 Sony and Panasonic are among several big-brand investors to back the diffractive optics firm DigiLens in a series B funding round worth $22 million.

The Sunnyvale, California, company, which has previously worked with BMW Motorrad on an augmented reality (AR) head-up display for motorcyclists, says that the new tranche of cash will enable it to bring its waveguide technology to market across “several” AR displays and sensors for enterprise, consumer and transportation applications.

Superior experience
Founder and CEO Jonathan Waldern, who has been involved in the virtual reality sector for more than two decades, said: "It's taken us several years to perfect our diffractive optical materials and exposure process for AR-HUD (head-up display) manufacture.

"Having successfully developed our DigiLens ‘AeroHUD’, in flight now for Rockwell Collins, this new investment will accelerate our wide-field-of-view ‘AutoHUD’ for Continental, MotoHUD’ we demoed with BMW, and ‘EyeHUD’ smart glasses for new partners in both enterprise and consumer markets."

Hiroshi Mukawa, the general manager of Sony’s AR Eyeglass Program, predicted that the use of diffractive optics technology would make for a superior consumer experience, saying: "The use of DigiLens waveguide technology will help us develop cutting-edge lenses that are much thinner and more transparent than any smart glass on the market today.”

"Augmented reality is a challenge, in part, because the devices are restrained by the laws of physics and not Moore's law,” he said. “We think diffractive optics holds the key to AR, but writing millions of tiny optic structures is best done photographically, using nano self-assembly, not expensive precision etching like HoloLens.

“We need to break the manufacturing price barrier. With DigiLens waveguide diffractive optics, they seem to have overcome most nagging technical problems and we see a very bright future for them.”

Gilman Louie, who founded Alsop Louie, added: "The next-generation display technology will be glass. Data on glass is a critical capability for augmented and mixed reality applications such as gaming, navigation, telepresence, education, industrial, medical and military."

DigiLens history
While it might now be regarded as a “hot” new Silicon Valley startup, DigiLens has in fact been around for quite a while. A US Securities and Exchange Commission (SEC) filing from late 2002 detailing a $4 million round of equity funding backed by the likes of Alta Venture Partners and Apex Venture Partners also listed Waldern as an executive officer at the time.

However, less than a year after that filing, DigiLens ceased trading amid the ongoing fall-out of the telecommunications bust, selling its intellectual property on electrically switchable Bragg gratings to the liquid crystal manufacturer SBG Labs.

And just a couple of months after that, SBG Labs sold its telecommunications photonic chip business to the Japanese glass giant Hoya.

The current incarnation of DigiLens raised $2 million in May 2014, enabling it to set up a 4000 ft2 clean room and pilot line to produce holographic switchable Bragg grating (SGB) components.

After also securing investment from In-Q-Tel – the venture wing of the US Central Intelligence Agency (CIA) – in support of potential security applications, DigiLens then reported that it had closed a $6.3 million round.

Waldern said at the time: “We have grown our business serving aerospace and military customers, but are experiencing a significant increase in demand from automotive, security and consumer electronics customers. By leveraging our toolbox of optical IP cores, we can increase our design starts, including enterprise augmented reality and consumer wearable displays.”

Describing its technology as “optical origami”, DigiLens prints holographic optics into a nanoscale optical thin film material. “By laminating two or three waveguide layers together, each only 1 mm thin, the company is able to deliver full-color versions of its unique waveguide display for a range of applications,” sates the firm.

• AR and virtual reality optics technology will feature in a special industry session at the forthcoming SPIE Photonics West event in San Francisco.

Speakers including Amazon’s Leo Baldwin, David Bohn from Microsoft’s HoloLens division, and Scott McEldowney, lead optics researcher at Oculus, are scheduled to take part in the event, which starts at 3pm on Tuesday January 31.