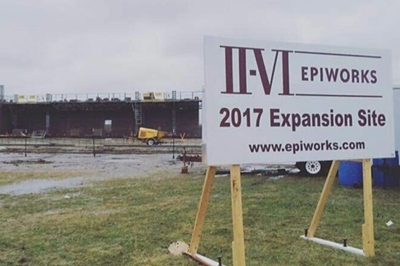 The stock-market value of laser and optical component maker II-VI rose 15 per cent after the Pittsburgh-headquartered company posted strong sales, earnings and bookings in its latest financial quarter.

In the three months to December 31, bookings jumped 32 per cent year-on-year to $274 million, while sales revenues of $232 million were up 21 per cent.

And although some of those increases can be attributed to acquisitions made in early 2016, investors will have been pleased that net earnings also rose solidly to $23.9 million, beating most analyst expectations.

Momentum
Commenting on that improved bottom-line, II-VI CEO Chuck Mattera said: “Company margin expansion is being driven by volume and manufacturing efficiencies. With a book to bill ratio of 1.18, we anticipate the momentum we are currently experiencing to continue through the second half of fiscal year 2017.”

He and the II-VI executive team are expecting sales to grow again in the current quarter, to between $234 million and $244 million. The firm’s largest business division, II-VI Photonics, is providing most of the momentum, with unit bookings up nearly 40 per cent year-on-year to $136.1 million in the December quarter.

Much of that order book is being filled by demand for optical components needed to upgrade communications networks for the “Broadband China” project, as well as the build-out of 100G metropolitan networks in the US, hardware for new data centers, and investment in submarine fiber-optic cables.

II-VI is itself investing heavily in its own infrastructure, with new facilities to manufacture vertical-cavity surface-emitting lasers (VCSELs) under construction. “We continue to install capital equipment, expand our operations, and scale our capability to manufacture compound semiconductor materials that will enable us to manufacture next-generation optoelectronic devices including VCSELs,” Mattera said.

In fact, figures reveal that II-VI spent nearly $10 million on the ramp of that VCSEL platform in the latest quarter, mostly on engineering activity, bringing total investment to around $32 million thus far.

“Sold out”
Mattera told an investor question-and-answer forum discussing the latest results that current demand from the communications sector for pump lasers, amplifier and passive photonic components was so high that II-VI is effectively “sold out” for the next two quarters.

“The customer increase is so strong that it surely justifies and warrants a 20-30 per cent increase in capacity, and that’s what we are aiming to do by the end of the fiscal year,” he said. The II-VI fiscal year runs until the end of June.

On the industrial laser side, where II-VI is a key provider of optics used inside carbon dioxide lasers and fiber lasers, the CEO said that demand had “woken up” in Europe in recent months, with good penetration in Asia to boot.

Responding to a question about demand from China, Mattera added: “For the rest of our fiscal year in China, I do not see or foresee any slowdown on any downshifting, it’s full speed ahead.”

VCSEL demand
Initial demand for VCSEL components is expected to come from the emerging market for 3-D sensing, and although II-VI said it would not speculate on the kinds of products that the devices will feature in, shipments are set to begin in earnest in the second half of calendar 2017.

II-VI already makes the devices at its semiconductor fab in Zurich, Switzerland, but capacity is set to ramp in a major way once its new 6-inch gallium arsenide wafer facility in Warren, New Jersey, comes online. VCSELs are typically manufactured on smaller wafers, and the larger size should give II-VI a significant advantage in terms of capacity, device yields and cost.

In response to the strong quarter, investors sent the II-VI stock price up nearly 15 per cent when US markets closed – valuing the company with a market capitalization of some $2.25 billion.

• II-VI is one of around 1300 photonics companies exhibiting at SPIE’s Photonics West event in San Francisco next week. It has announced a variety of new product releases for the show, including multi-band coated optics for hybrid high-power laser processing (i.e. both fiber and carbon dioxide sources) and new 250W actively cooled laser bars for use in direct-diode processing systems. II-VI will be at booth 1833.