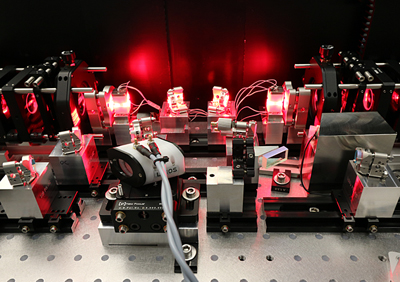 The Fraunhofer Institute for Laser Technology (ILT) is developing new satellite-based laser beam sources to support a climate research program. The research center is part of the ALISE project (Diode-pumped Alexandrite Laser Instrument for next generation Satellite-based Earth observation), which started in August 2016 and is set to run until July 2018.

The ILT is working with the Leibniz Institute for Atmospheric Physics (IAP) and Airbus Defence & Space; for its part the ILT is investigating the technical feasibility and the possible applications of a novel laser system for satellite-based observation of the world's climate.

To develop effective measures against global warming, scientists need climate models that reliably represent interrelationships in the atmosphere. The ILT believes that there is insufficient data about such relationships at high altitude (in the mesosphere), where crucial processes for global air circulation occur.

For the measurement of temperature and wind speed at this altitude, climate researchers usually rely on the modern resonance-lidar process. However, due to their complexity and weight, these laser measuring systems are being used almost exclusively on the ground.

The work in ALISE (further information in German) constitutes the first step in developing a satellite-based observation system that will allow wind and temperature conditions to be measured temporally and spatially at high-resolution in the mesosphere.

To achieve this, the efficiency of the laser beam source – an alexandrite laser – needs to be increased by using laser diodes as a pump source. Furthermore, complexity and component weight will be reduced so that the requirements for space-based missions can be met.

In order to take advantage of laser measurement technology in satellite-based Earth observation, the ILT scientists from Aachen have applied their knowledge to developing laser beam sources and optical components for atmospheric measurements.

They have previously demonstrated this capability, among other projects, in the Franco-German climate mission MERLIN and the CHARM-F project. The CHARM-F system recently successfully completed its first flight on the German research aircraft HALO (High Altitude and Long Range Research Aircraft) of the German Aerospace Centre (DLR).

The aim of this project, which is supervised by the DLR, while the project's budget is entirely provided by the Federal Ministry of Economic Affairs and Energy, is to demonstrate that a diode-pumped alexandrite laser meets all spectral, spatial and energetic requirements for climate-relevant Doppler resonance lidar measurement and the requirements regarding the efficiency and repetition rate of space-based systems.

Together with a novel Lidar technology, this is the first step towards a satellite-based and thus global temperature and wind measurement with high temporal and spatial resolution in the mesosphere. This would make possible for the first time the capture of gravidial waves in the mesosphere and to be able to detect and model their Influence on the world’s climate.

Besides the development of a diode-pumped alexandrite laser by the Fraunhofer ILT, it is intended that the available pumping brilliance is to be increased via various innovations in order to reduce the complexity of the resonator and thus meet the requirements of a space-based application.

Due to its size and complexity so far, the lenticular technique required for the desired measurements is not suited to meet the limitations of a satellite-based mission. Through an innovative concept developed by the Leibniz Institute IAP and the use of newly-developed components, the project scientists expect to demonstrate for the first time that the optical design can be limited to a considerably smaller installation space. Further to this, a novel method for detection and control is intended to demonstrate that the system’s complexity can be further reduced and, therefore a implementation on a satellite will be possible.