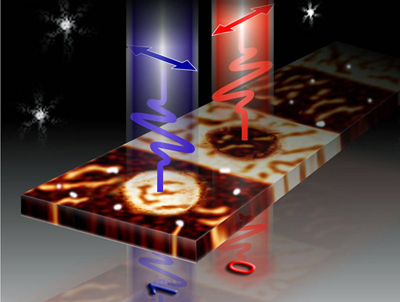 Cheaper - and cooler - data recording will be crucial to 21st century economics.

A strong, short light pulse can record data on a magnetic layer of yttrium iron garnet doped with cobalt-ions. This novel optical storage mechanism – which the developers say could one day become a powerful and energy-efficient data storage technique – outperforms existing alternatives and could enable the fastest ever write-read magnetic recording process with unprecedentedly low heat load.

The method is being developed by researchers at Radboud University, Netherlands, and Bialystok University, Poland, and is this week reported in Nature.

Reliable, cheap and quick data recording will be as crucial to 21st century economics as oil was to that of the 20th century, say the researchers. Magnetic recording performs relatively well in that respect, but data centers are becoming overheated due to the sharp rise in the demand for Cloud storage.

The problem is that much energy is needed to cool such processors. Heat Assisted Magnetic Recording, a recent innovation in magnetic recording, does not solve this problem. On the contrary, it uses the heat of a laser pulse to enable the recording process. For this reason, super-fast magnetic recording that produces no heat and does not need electromagnets is the "holy grail" of current fundamental and applied research on magnetism.

Researchers from Radboud have been experimenting with ways to use the energy of a light pulse to manipulate magnets for more than a decade. Professor Theo Rasing and his colleagues published their first results in a 2007 article in Physical Review Letters. The problem with their initial findings was that the mechanism of the recording relied on laser-induced heating that reached temperatures close to the so called Curie temperature, above which any permanent magnetic order is destroyed.

To solve the heating problem, a medium with low optical absorption is required. For metals with a lot of free electrons, the absorption of light – and thus heating – is unavoidable. To reduce the heating, a dielectric material must be used. In the latest study, the scientists chose yttrium iron garnet (YIG), considered to be one of the “model magnetic dielectrics”. It is not possible to record information optically on normal YIG, so to increase its sensitivity to optical excitation, the scientists doped it with Co-ions.

The scientists found that in the Co-substituted garnet film, a single linearly-polarized femtosecond laser pulse promotes switching of spins between different states. “By changing the polarization of the laser pulse we deterministically steer the net magnetization in the garnet: we write 0 and 1 magnetic bits at will,” said physicist Alexey Kimel from Radboud. “This outperforms existing alternatives, allowing the fastest-ever magnetic write-read recording event, lower than 20 ps, accompanied by an unprecedentedly low heat load.”

Using light for magnetic switching on garnet films will probably not be applied in personal computers. “The technology gap between storing on metal and garnet crystal is too big,”, said Kimel . “But it could be an interesting option for the big data warehouses of Google and Facebook and the like.

”Another possible use could be data recording at very low temperatures. Super conducting electronics and quantum computers lack a fast memory system that can record at temperatures below 10 Kelvin (-263 Celsius). Up until now this was a serious obstacle for super conducting computing.”

optics.org interviewed Alexey Kimel about how this room-temperature development could potentially impact the commercial data recording and storage market. “During the past decade, magnetic industries have been working on the novel concept of Heat Assisted Magnetic Recording. To record a single bit of data you need the combined action of a magnetic field from an electromagnet and light from a laser. The latter is used to heat the area, in which the information is written. HAMR is expected to reach the market in 2018. But there is no clarity what kind of concept the industries should work on after 2018.

”Our discovery reveals that light can record information ultra rapidly, with no need for electromagnets and almost without heat. The heat generated during recording in state-of-the-art MRAM devices is about 100 femtoJ per bit. For a bit of the same size one recording event with the help of our approach would be accompanied by 1000 times less heat dissipations.”

According to the US Environmental Protection Agency, just one decade ago servers and data centers worldwide consumed 61 billion kWh (according to the EPA report to Congress on server and data center energy efficiency). That represented around 1.5% of the total US’s annual electricity consumption, amounting to $4.5 billion in electricity costs and this amount is now growing at 7% annually. Kimel commented, “Implementation of our approach for recording in data centers may greatly help to solve the problem.”

Asked whether the project could involve commercial partners for financial support or possible product development, Kimel commented, “Just one year ago even our colleagues-scientists did not believe that such an ultrafast magnetic recording with almost no heat was possible. Several proposals aimed at the search of this phenomenon have been rejected. We have now proven that we were right. Hopefully we will soon be able to answer positively also on commercialization.”