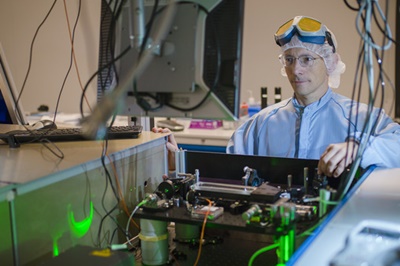 A cutting-edge ultrafast laser system that it is hoped will be capable of producing intense attosecond pulses is under construction at a new laboratory at Umeå University in Sweden.

Researcher László Veisz and his team are in the process of re-starting and upgrading the system, after it was transferred from its previous home at the renowned Max Planck Institute of Quantum Optics (MPQ) in Garching, Germany, earlier this year.

“We are intensely working to re-start the laser and two experiments,” Veisz told optics.org. “I expect that it needs 12 months (we moved end of March). Some parts are already working, but we also spend a lot of time to improve the system not just re-start [it].”

100 attosecond pulses
The key goal at the new location, where Veisz has been joined by four members of the Garching team, is to generate intense attosecond pulses of extreme ultraviolet (XUV) light, as well as electron “bunches”.

He hopes that the unique system will make it possible to observe and control the motion of electrons in atoms, molecules, solids and plasmas. “The various experiments are aiming at [a] different kind of attosecond pulse generation from gas media or relativistic plasmas,” Veisz explained.

According to a Umeå release, two huge lorries were needed to move the various lasers, optics and vacuum chambers from Germany – the XUV pulses are generated by a large system, measuring up to 26 meters in length.

Once up and running, it should be able to deliver pulses just 100 attoseconds in duration, which is sufficiently short to observe and influence fundamental physical phenomena like the oscillation of chemical bonds.

Teams at MPQ’s Laboratory for Attosecond Physics, the Attosecond Science Laboratory in Saudi Arabia, and the Extreme Light Infrastructure-Attosecond Light Pulse Source (ELI-ALPS) currently under construction near Budapest in Hungary are all working on similar systems, with varying power and pulse repetition rates.

Veisz even thinks that it may be possible to commercialize the planned system in the future, although he admits that this is a long-term goal. “This is a big piece of hardware on an optical table with a size of many meters,” he said. “I expect also smaller developments will be interesting for commercial purposes.”

Among the scientific applications of the system he envisages are faster, light-driven electronics, investigating macromolecular structures in unprecedented detail for biomedicine, and “next-generation” temporal metrology.