European project is working on a light source and instrumental platforms for low-cost optical devices. 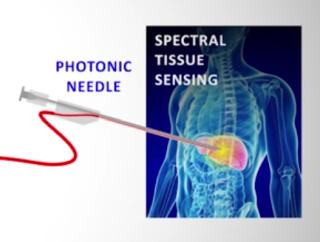 The advantages of minimally invasive image-guided surgical procedures to clinicians seeking to identify cancerous tumors or other medical conditions are obvious. But at present the equipment available for the task is not always ideal.

InSPECT (from Integrated Spectrometers for Spectral Tissue Sensing) is a Horizon 2020 project aiming to address this challenge, by developing photonic building blocks for low cost miniaturized spectral sensing devices and investigating how they could be integrated into clinically useful tissue analysis devices.

The InSPECT consortium is designing a miniature broadband LED-based light source emitting across the visible, near- and short-wave infrared ranges, from 400 to 1700 nanometers. It is also developing a novel low-cost broadband spectrometer platform, allowing techniques based around the new source to translate more smoothly into clinical environments than current instrumental systems may allow.

"InSPECT is not aiming to develop spectral sensing methods as such, but is concerned with miniaturization of the optical technologies involved in procedures like diffuse reflectance spectroscopy," commented project coordinator Jean Schleipen of Philips Research.

"Spectral tissue sensing using compact photonic probes promises to be a valuable tool for screening and diagnostics, but for widespread adoption and commercial viability, there is a need for broadband miniature spectrometer devices to become available at an affordable cost. Making systems smaller and more compact would also be advantageous, ultimately opening the path to new mobile applications using spectral sensing."

The project, currently half-way through its three-year time span, has two main goals. The first is the development of the broadband LED-based light source itself, as an alternative to bulky and inefficient incandescent halogen sources which are difficult to couple into optical fibers for use in clinical probes.

"The other goal is miniaturization of the spectrometer platform itself," said Schleipen. "At present no single commercial instruments are available that cover the full spectral range of interest, so two discrete spectrometers are needed in practice: one based on a silicon detector for the visible and near-IR, and another using InGaAs detectors for the longer wavelengths."

Optical biopsies
This challenge is in turn being tackled on two paths. One is the development of what the project terms a "microSpectrometer," based on the miniaturisation and integration of standard discrete optical elements and suitable photo-detectors in a device of roughly one cubic inch volume.

A further, more technically ambitious, target is achieving the same spectrometer function in a photonic integrated circuit (PIC) based on transparent silicon dioxide/silicon nitride waveguide technology. The "nanoSpectrometer" concept being investigated by project partners Aifotec, Fraunhofer IZM, and XiO Photonics could lead to new and potentially key enabling photonic building blocks, allowing spectroscopy to be carried out on a photonic chip and driving the adoption of spectral sensing in applications that were not accessible before.

Such a nanoSpectrometer represents a technology challenge for the project, involving research into broadband waveguide structures and arrayed waveguide gratings, alongside ways to couple the single-mode PIC waveguides to the multimode outside world.

InSPECT envisages its technology ultimately being used to carry out real-time spectroscopy on tissue specimens obtained during biopsy procedures, thereby giving immediate feedback to a physician during an intervention. Other possible applications include agricultural monitoring, or in consumer markets, where handheld devices capable of measuring spectral fingerprints would naturally benefit from extensions to the wavelengths being monitored, as well as from reliable, smaller and cheaper devices.

"Our vision is that in a longer timescale, say in 5 to 10 years, we have an optical method to carry out broadband spectroscopy in a very small compact chip, that could then be integrated into portable medical devices or in mobile phones," commented Schleipen.