European research team believes that devices based on the two thin-film materials could operate at 25% efficiency with further refinements. 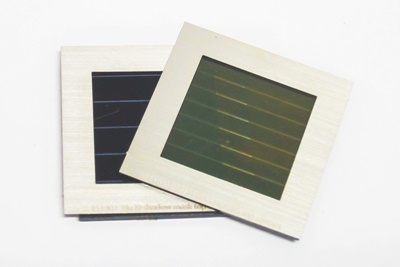 Researchers in Europe have collaborated to produce a tandem photovoltaic module from perovskite and copper indium gallium selenide (CIGS) whose efficiency exceeds that of the best devices made from the individual materials.

With expertise from Belgian microelectronics center imec, the Karlsruhe Institute of Technology (KIT), and the Zentrum für Sonnenenergie- und Wasserstoff-Forschung Baden-Württemberg (Centre for Solar Energy and Hydrogen Research, ZSW), the team made a small-area stack with a conversion efficiency of 17.8 per cent.

That compares with imec’s best of 15.3 per cent for a perovskite module, and ZSW’s standalone CIGS modules at 15.7 per cent.

Small – but scalable
Although the new module measures only 3.76 cm2 in area, the collaboration believes that it represents a “fully scalable” device concept. “Both the perovskite top module and the CIGS bottom module feature a monolithic interconnection scheme, using seven and four module cell stripes respectively,” they report. “The result is a reduction of area loss of less than eight percent for both technologies.”

Using the two different materials means that more of the solar spectrum can be harvested, with the semi-transparent perovskite layer able to both absorb higher-energy photons and allow lower-energy photons through to be absorbed by the CIGS layer underneath.

Ulrich Paetzold, head of the KIT part of the collaboration, says that the result represents a starting point, with the possibility of reaching module efficiencies in excess of 25 per cent within a few years.

His KIT group is working to improve the optics in multi-junction perovskite solar modules, and looking to develop specialized nanophotonic materials for the novel devices.

Perovskite conference
ZSW’s Michael Powalla, whose team provided the CIGS solar expertise, added: “This success is an elegant way of combining the advantages of two highly advanced thin-film technologies. It will contribute greatly to ever more cost-efficient solar power for the customer.”

Encouragingly, ZSW’s best-performing CIGS cells currently stand at the record-setting level of 22.6 per cent efficiency, suggesting that the 25 per cent target for the tandem modules is a realistic one.

Paetzold, ZSW’s Erik Ahlswede, and imec’s head of thin-film PV research Tom Aernouts were due to present details of the new tandem module at this week’s Perovskite Solar Cells and Optoelectronics (PSCO 2016) event in Genova, Italy.

Among the other well-known speakers at the event are Henry Snaith from the University of Oxford, Yang Yang from the University of California, Los Angeles (UCLA), and Sang Il Seok, whose Ulsan National Institute of Science and Technology team in Korea currently holds the record for the best-performing perovskite solar cell, at 22.1 per cent.