Optics+Photonics 2016: LIGO now targeting 'every black hole’ in the Universe 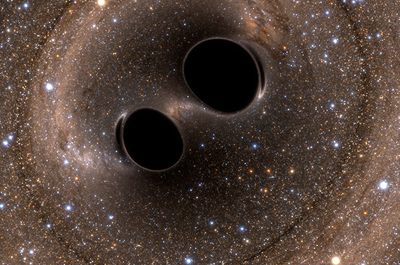 With Round two of the Great Gravitational Wave Watch just weeks away, one of the world’s top black hole watchers on Tuesday voiced a lofty goal at SPIE’s Optics+Photonics gathering in San Diego.

The world knows about the historic recording at LIGO a year ago of two wild black holes crashing a billion years ago, confirming Einstein’s theories, said Daniel Sigg, the exuberant chief scientist at the observatory that made the discovery. But stay tuned.

“This was not a one-time shot,” he said. “Next time, we won’t be out to prove that gravitational waves exist. Now, we are just going to do astrophysics.

His goal, he said: “To capture every black hole merger in the entire universe.”

Round one’s great success included a 200 millisecond recording on Sept. 14, 2015, of a tiny chirp that resulted from the collision of two black holes spinning at 100 times a second.

That was followed by a second, longer recording, of one second of data, on December 26, confirming Einstein’s predictions 100 years ago of such ripples in space. Until these observations, some had doubts that the waves existed. 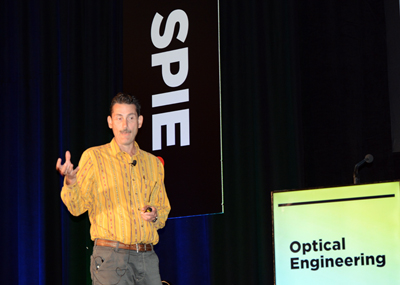 Now, Sigg and about a thousand others around the world are preparing for Round 2, called O2 by the LIGO team, and they expect to hear plenty more.

Sigg gave the plenary talk at SPIE’s Optical Engineering Session, providing an inside look at the LIGO detectors, with a part called a “test mass,” a big word for a pizza-sized mirror, hanging on a pendulum suspended in a vacuum to reduce the noise.

“To hear a tiny, brief chirp from millions of years ago, you need to have it very quiet,” Sigg said. The amplitude of the movement, he said, was just a 200th of a proton.

“That’s not a lot of motion,” Sigg said drily.

And that, Sigg said, might be the smallest movement of any object ever recorded.

The San Diego Convention Center crowd was spellbound at his high-tech account of the first observation of a binary black hole merger, which Sigg called “the best test of General Relativity in the strong field, nonlinear regime.”

Work with several other observatories abroad will increase in the next few years, including Europe’s Virgo, a large interferometer in Italy, near Pisa, named for the constellation Virgo, and two in Asia.

The additional sites will add strength to each LIGO observation. “It will give us sky localization,” Sigg said. “It will tell us exactly where it is in the sky.”

The NSF has contributed $200 million for the current LIGO detector, following $100 million for earlier development of facilities. It provides some $30 million a year, mainly for the 100 experts at Caltech and MIT, which jointly operate the project.

The current LIGO facilities will run until at least 2020, when the team will argue for major improvements. A cryogenic detector is under consideration. “To be ready for the long term future,” Sigg said, “you have to start thinking now.”

And thinking big. Sigg said future observations may be of events from when “the first stars were born.”

“What happened at the beginning of the universe?” Sigg asked. “That’s a good cause, a good idea.”

MIT produced the following video about how LIGO is detecting gravitational waves (February 2016).

Ford Burkhart is a contributing editor to optics.org.