Optics+Photonics 2016: artificial recycling of CO2 into fuel does work

However, big questions remain and much research still lies ahead, conference hears.

From Ford Burkhart in San Diego

Artificial photosynthesis – a bit like the work of an oxygen-generating leaf, but without a tree – will one day reduce CO2 levels in the atmosphere as it generates fuels, but much research lies ahead, a top expert told his SPIE Optics and Photonics audience in San Diego this week.

“It’s the grand challenge for the Earth, making CO2 a recyclable commodity,” said Harry Atwater, a materials scientist at Cal Tech, in Pasadena, California. He gave the plenary talk for at the Nanoscience and Engineering Plenary on Optics and Photonics for Sustainable Energy.

“For now, finding a way to use sunlight to convert water and CO2 into fuel, in a balanced reaction with oxygen as a byproduct, is very much in the basic research stage,” Atwater said.

Current technology can produce, for example, hydrogen by splitting water into oxygen and hydrogen with fairly high efficiency – about 10 per cent. It’s also possible to make methanol fuel from CO2, which can be captured from smokestacks, but this process delivers a very low yield. 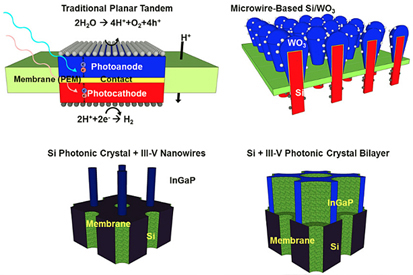 “What’s needed are ways to increase the stability of the technology, and thus extend device lifetimes” said Atwater. The devices must be able to show a lifetime of “not just hours but of tens of years. Artificial photosynthetic devices need to be stable enough to allow them to last as long as a photovoltaic panel,” Atwater said, “and that’s about 25 years.”

Like nature’s way of synthesis, reduction and oxidation of water requires catalysts, and Atwater, the director of the Joint Center for Artificial Photosynthesis (JCAP), Pasadena, Ca, said his team has made significant progress in developing new electrocatalysts, but a key goal at JCAP is to identify new ones.

The test devices run with only sunlight. “No wires needed,” said Atwater. His center’s devices are ten times more efficient than current crops, which do photosynthesis at 3 per cent efficiency.

His center’s devices for splitting water are ten times more efficient than current crops, which do photosynthesis at 3 per cent efficiency. “But now,” Atwater said, “we need to develop the stability to let them run for hundreds of hours. If we can achieve solar-to-fuel generation at 10 percent efficiency, that would be quite an accomplishment.”

Fuel generation by water splitting generates mainly hydrogen, which can be used directly in fuel cells, and oxygen as a byproduct. That process runs with an efficiency of 12.4 percent. “But again, stability is what we need,” Atwater said. “We don’t have long-term stability right now.”

The outlook is promising, Atwater said, with “exciting reports almost weekly of efficiencies of up to 14 percent in global industry for new catalysts. We can anticipate solar to hydrogen efficiencies to rise even further.”

JCAP’s goal is 20 percent efficiency, “and well beyond that,” Atwater said. “We can expect that with sustained effort in research, as high as 15 to 20 per cent efficiency for solar-to-hydrogen conversion might be possible.”

And that’s at the heart of what Atwater calls “the daunting millennial challenge of deriving useful fuels from CO2. It’s our greatest global warming gas. We need to close the carbon cycle.”

Cutting CO2 levels is central to maintaining atmosphere temperature rises of no more than 1.5 degrees a year. “To do that,” Atwater said, “we need to sharply curtail CO2 now. We need zero carbon routes in the future.” Thus, the team aims to generate transportation fuels, like methanol, from these wastes. 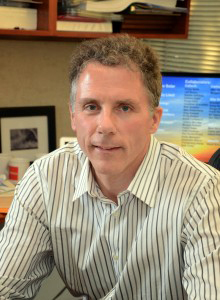 'Holy Grail' “In artificial synthesis, the Holy Grail is cost effective methods of recycling CO2, finding ways to recycle the CO2 emitted from power plants. Recycling direct from the atmosphere is an active area of research at the US Department of Energy, he said.

He warned that emissions of CO2 are at the level of 10 gigatons a year, and fuels make up 8.5 gigatons of that amount.

Synthesizing fuels alone is not enough, Atwater said. “We need to make this be a sustainable, profitable enterprise. The biggest market for the products obtained from emitted CO2 is as fuels.”

Synthetic methanol can be converted to gasoline, Atwater said, with 95 percent efficiency. “We think of our mantra as to produce 'methanol or better', materials that are usable as fuels,” Atwater said.

Atwater is the Howard Hughes Professor of Applied Physics and Materials Science at Cal Tech.

For Burkhart is a contributing editor to optics.org.