Optics+Photonics 2016: Zoom lenses on next Mars Rover: a first for NASA

From Ford Burkhart, in San Diego 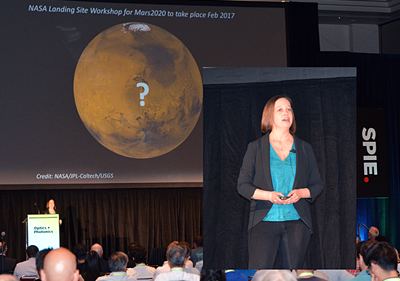 The Mastcam-Z for the next program of imaging on Mars will feature a novel zoom feature.

Life on Mars? Maybe 4 billion years ago. NASA is stepping up the search for clues, and an SPIE opening night crowd at this year’s Optics+Photonics conference got an exclusive preview on Sunday of dazzling cameras, including the Mastcam-Z, being designed for the next level of imaging science on the planet known for its red dust.

In addition to a novel zoom feature, the set of space-age cameras on the next VW Beetle-sized rover, a $2.1 billion project set to launch in 2020, will have an improved multispectral imaging capability, said Melissa Rice, a professor in geology and physics and astronomy at Western Washington University.

“That will allow us to observe the Martian surface and atmosphere in wavelengths of 400nm to 1,000nm, and to characterize the mineralogy and hydration state,” Rice told a full house crowd at the San Diego Convention Center.

The new 2020 rover – still without its own distinctive name – will be the same size and weight as the Curiosity from 2012. Its payload will make it the first to use the MastCam Z, with the Z for Zoom. Its double camera heads will also provide stereo photos in wide angle. Those cameras are being assembled here in San Diego, at the Malin Space Science Systems facilities.

The 2020 launch will be the first mission to work under the mission goal of collecting samples. Completing that task will take, in all, three full missions. The sampling location on Mars will be debated at a conference by NASA in Monrovia, California, near Pasadena, next February, Rice said.

Rice showed the crowd new scenes of dry, dusty Mars – including one taken by the rover Opportunity just one day before the SPIE meeting opened – that are giving clues to Mars as a very different place a few billion years ago, with flowing streams. “And that may show whether there was enough water, energy, carbon, oxygen, nitrogen, the nutrients for life on Mars,” Rice said.

Rice, part of the Mars Curiosity Rover team of hundreds of scientists, discussed instrumentation plans for future imaging by the next generation of rover. She traced a history of fuzzy, round images of decades ago, from telescopes, to the fine-grain geology, rather like the moon or Earth, sent back by the first spacecraft to arrive, in 1964. 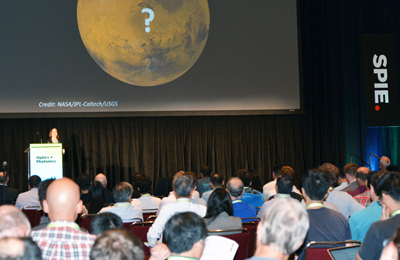 The ‘world’ of Mars

“Mars turned from being a planet to being a world,” she said. Scientists discovered there the tallest volcanoes in the solar system, with one volcano proving as wide as the State of Washington. Images from Mariner 9 revealed the largest canyon system in the solar system.

“It was a dynamic world of extremes,” Rice said, with evidence of liquid flowing across the surface. The information expanded with the Viking 1 Lander in 1976 and the 1997 Mars Pathfinder, which showed gullies that seem likely carved by water flowing down the hills. Current cameras including the HiRISE CCD camera in orbit around Mars, have a resolution of 25 cm per pixel, sharp enough to offer spectacular images of dust devil tracks in the sand dune, which Rice displayed for her audience.

The images show a planet more Earth-like than previously thought, with a history of rainfall and snow melts, but nothing green – so far. “But all the conditions necessary for life seem to have been there, 3.5 billion years ago,” Rice said. “Could life have taken hold on Mars? That is the question.” The Curiosity rover, having just celebrated its fourth birthday, is still going strong, two years beyond its estimated nominal mission length.

One key is Curiosity’s plutonium energy source. Running on low power, just 100 watts a day, the rover covers about 100 meters a day. Older ones used a solar panel system. She showed the crowd a close-up of the rover’s wheel track in the dust, “like Neil Armstrong’s first step on the moon,” she said. “In a way, it is a human footprint on Mars.”

Rice, whose specialty is spectroscopic capabilities of the cameras, showed stunning images of blue Martian sunsets. And she relayed the NASA prediction that “within our lifetimes,” humans will stand on the reddish-brownish surface of Mars to view those sunsets themselves. She hoped that there would be a poet among the pioneers.

The 2020 mission, Rice said, will be the first by NASA to have as its mission an explanation of astrobiology – that is, the search for past life. Perhaps 4 billion years past.

Ford Burkhart is a contributing editor to optics.org, based in Tucson, Arizona.