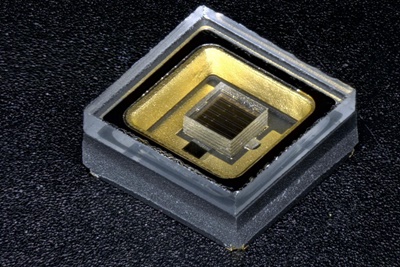 With bases in Kentucky and North Carolina, AquiSense uses deep-UV (UV-C) LEDs in its systems, devices emitting between wavelengths of 255 nm and 350 nm. Those manufactured by Nikkiso exploit technology initially developed by 2014 Nobel physics laureates Isamu Akasaki and Hiroshi Amano.

But the Japanese firm also sells a huge number of industrial pumps that could potentially incorporate UV-LED disinfection as standard in the future.

UV-LED production ramp
Nikkiso has not been making the optoelectronic devices for particularly long – it began shipping UV-LEDs in late 2013, with early products appearing at SPIE’s Photonics West trade exhibition in February 2014. But the firm soon scaled its manufacturing capacity with a 1500 m2 fabrication facility located in Japan’s Ishikawa Prefecture on Honshu Island.

That $22 million investment, which included new epitaxial equipment to deposit the key UV-emitting layers of the semiconductor material stack, has since delivered industry-leading output powers at UV-C and UV-B wavelengths, in the form of both single-chip and multi-chip modules.

Earlier this year Nikkiso released 50 mW UV-LEDs, initially at a wavelength of 285 nm but with subsequent launches spanning the 265-300 nm range.

According to the company, the aluminum gallium nitride (AlGaN) semiconductor layers are the key to that power output and efficiency. Developed by Amano, Akasaki, and the arguably much better-known Shuji Nakamura, the technology behind the Nobel win is much more widely used in the blue LEDs that now feature in myriad commercial lighting applications.

Getting LEDs to emit at the shorter UV wavelengths needed for anti-microbial effects is even more challenging in terms of materials science and semiconductor physics, but has always held out the promise of a potentially huge market in water sterilization – without the mercury problem inherent to conventional and far less efficient UV lamps.

Other applications include biomedical instrumentation, dermatology, curing of industrial resins and inks, and air purification.

AquiSense team still on board
Although AquiSense only began operations in 2014, the company’s experience in UV-LEDs can be traced back to 2003, and research into quantum-dot devices by the US start-up Dot Metrics Technologies.

AquiSense acquired Dot Metrics in June 2015, shortly after which it launched a new version of the award-winning “PearlAqua” UV disinfection module. As recently as May the company moved into a new production facility to ramp up production of the PearlAqua and PearlBeam product lines.

Its CEO Oliver Lawal was previously the president of Halma subsidiary Aquionics, before AquiSense acquired some of the Aquionics technology. He said in a company release:

“We have worked closely with a number of suppliers to integrate the best UV-C LEDs, and Nikkiso have consistently delivered strong product to us.” Lawal is set to continue in his role post-acquisition, along with CTO Jennifer Pagan and the rest of the AquiSense team.

Pagan was previously the director of research at Dot Metrics, and has also worked at Waveguide Solutions and Digital Optics Corporation.

According to Nikkiso, the $9.3 million cash deal includes advisory fees.