But the organic LED materials firm says revenue delay is only temporary as customers gear up for capacity ramps next year. 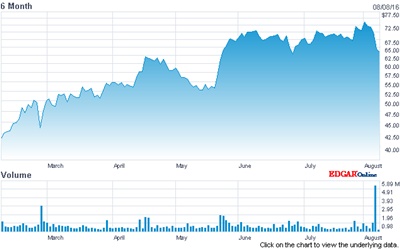 Organic LED (OLED) materials developer Universal Display Corporation (UDC) says that its sales growth will be hit temporarily, ahead of a major production ramp by display manufacturers next year.

News of what executives expect will be a six-month delay before those capacity ramps start contributing to revenues sent the New Jersey firm’s stock price tumbling 8 per cent on the Nasdaq exchange on August 5, after UDC posted its latest financial results.

Royalty swing
That swing into the black resulted from much higher royalty payments – UDC only receives licensing payments from key customer Samsung in the second and fourth fiscal quarters of its fiscal year - coupled with a large fall in the cost of material sales.

CFO Sid Rosenblatt told an investor conference call that the UDC team had revised down their sales forecasts for the full year to between $190 million and $200 million. That compares with prior expectations of between $210 million and $230 million, but the hiatus looks like it will be a brief one.

“We expect strong revenue growth in 2017,” Rosenblatt added. “At that time, new OLED production from the multi-year capital expenditure cycle is slated to start contributing to our revenues.

“Ahead of this wave of high-volume capacity, we have been working to expand and broaden our team and core competencies to advance our strategic initiatives and increase our competitive edge. We expect these initiatives, along with new OLED capacity, coupled with our pipeline of new materials, new technologies and new agreements, to bolster our long-term growth plan.”

New Chinese customer signed up
Shortly after posting those results UDC said it had signed a license and material purchase agreement with Chinese display panel maker Tianma Microelectronics (TMC). The company specializes in small- and medium-sized screens and is said to be a major player in the domestic Chinese market.

“Tianma has been at the forefront of OLED research and development in China for a number of years, and we look forward to working with [them] to advance their commercial OLED product pipeline with our proprietary OLED technologies and materials.”

He added: “Around the world, we believe that OLED research, development and investment activities are gaining tremendous ground, as consumer demand for cutting-edge, fast-response, thin, energy-efficient displays continues to rise, in products such as smartphones, wearables, tablets and automotive.”

Abramson said during the firm’s investor conference call that due to the nature of the displays business just one or two decisions by customers could have a big influence on UDC’s sales in the remainder of 2016.

But come 2017, the still-emerging OLED industry will be ready to embark on its next growth cycle, he added. Specific plans include Samsung’s ramp of an existing OLED fabrication facility to full capacity, while there is also speculation that the same company will convert one of its LCD production lines to a generation 6 OLED line for smaller display types - perhaps for future Apple iPhone displays.

LG ‘slighting fab under construction
In addition to that, LG Display has just announced its fifth significant OLED investment in the past year, with plans to build a generation 6 production line for flexible mobile handset display applications.

Outside the Korean center of OLED gravity, AU Optronics is set to produce small OLED panels for wearable displays at its Taiwan site, while Foxconn’s recent acquisition of Sharp is expected to result in an acceleration of the Japanese display firm’s OLED panel production.

• Despite the revised guidance and slip in stock price to around $64 on the Nasdaq exchange, the massive potential seen for OLED market growth means that UDC still commands a hefty price-earnings ratio, and a market capitalization in the region of $3 billion.