Measurement of ultra-small magnetic fields from a frog nerve could lead to practical use in diagnostics. 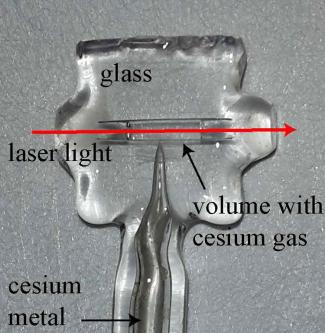 When nerve fibers are active they are surrounded by a small magnetic field, thanks to the electrical impulses being passed along a signalling nerve. But measuring that field can be difficult.

To date, techniques to detect it have tended to involve superconducting magnetic field sensors cooled by liquid helium and a pick-up coil in which the nerve must be positioned - not very conducive to in vivo applications, and prone to giving inflated measurements of the field generated.

Researchers from the Niels Bohr Institute at the University of Copenhagen have now developed an alternative method that promises to be both more convenient and less expensive, potentially opening up the possibility of magnetic field measurement as a diagnostic tool for diseases of the brain or for heart problems in young fetuses.

The breakthrough involves a new design of optical atomic magnetometer, able to operate at room temperature and be positioned close enough to the nerve to detect the field before it decreases rapidly away from the source. The results were published in Scientific Reports.

"This optical magnetic field sensor is based on a gas of cesium atoms in a small glass container," commented Kasper Jensen of Quantop, the Institute's Center for Quantum Optics. "Each cesium atom is equivalent to a small bar magnet, which is affected by external magnetic fields."

The influence of those fields is detected using laser light, by first optically pumping the cesium with circularly polarized light to produce a particular magnetic moment - or spin - of the atoms. A separate probe pulse can then detect the change in that magnetic moment caused by the interfering field from the nerve, which alters the tilt of the spinning atoms and also the polarization of the probe light.

Low noise
To test the new magnetometer the team used a frog sciatic nerve, in an ex vivo experiment where the sensor proved able to detect the nerve impulse from more than five millimeters away.

The instrument's cesium atoms are held within a channel one millimeter across, and the sensor's glass chip itself measures only eight millimeters along its longest side, effectively ensuring that the atoms are on average only a small distance from the nerve when the sensor is close by. As well as assisting the spatial resolution of the device, the modest dimensions should help potential use of the device in conventional clinical scenarios.

Data from the frog nerve also showed that the instrument's sensitivity was quantum-limited, dominated by the quantum shot noise of light and the inherent noise of atomic spins - also promising for a sensor intended for room-temperature operation in real-world biomedical applications.

Those uses could include spotting diseases which damage the nerves and affect the speed at which impulses travel, such as multiple sclerosis; or measuring the electrical signals in specific nerve pathways as part of monitoring the progression of Alzheimer's.

"We also expect that the sensor will be used for special medical examinations, where it is important for the sensor not to be directly in contact with the body; for example, diagnosing heart problems in tiny fetuses," said Eugene Polzik, head of Quantop. "Here the sensor is placed on the mother's abdomen and you can easily and safely detect the heartbeat of the fetus, to diagnose any heart problems at an early stage."