Tiny telescopes fitted with off-the-shelf spectrometers and imagers could be used as exploratory tools in advance of major astronomy missions. 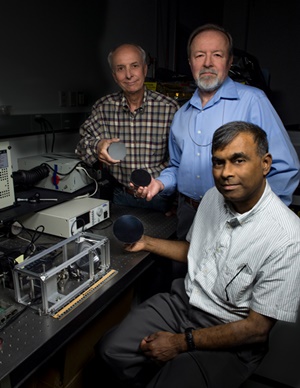 A team from NASA’s Goddard Space Flight Center is working on a new kind of telescope mirror that could be deployed in space via tiny CubeSats.

Theodor Kostiuk and colleagues reckon that a mirror made from carbon nanotubes (CNTs) set in an epoxy resin could provide the basis for a cheap and compact design that would fit inside the four-inch-cubed launch payloads.

Combined with off-the-shelf spectrometer and imager components, they would not be expected to produce ground-breaking results like the Hubble Space Telescope or a large ground-based facility, but could be used in an exploratory role to help shape flagship future missions.

According to NASA, a telescope based on the CNT mirror would be sensitive across the ultraviolet, optical and near-infrared regions of the spectrum. Kostiuk said in a NASA release that the approach could provide a “quick look” that could lead to larger missions, adding: “We’re trying to exploit commercially available components.”

As well as being compact and lightweight, the CNT mirrors ought to be easily reproducible, and also have the distinct advantage that they would not require the time-consuming polishing process that conventional mirrors undergo.

“To make a mirror, technicians simply pour the mixture of epoxy and carbon nanotubes into a mandrel or mold fashioned to meet a particular optical prescription,” reports NASA. “They then heat the mold to cure and harden the epoxy. Once set, the mirror then is coated with a reflective material of aluminum and silicon dioxide.”

The spectrometers are connected via fiber-optic cables to the focused beam of a three-inch diameter CNT mirror, they explain.

Peter Chen, president of the Goddard contractor Lightweight Telescopes, is working with Kostiuk’s group on the project. He said: “No one has been able to make a mirror using a CNT resin. This is a unique technology currently available only at Goddard.

“The technology is too new to fly in space, and first must go through the various levels of technological advancement. But this is what my Goddard colleagues are trying to accomplish through the CubeSat program.”

The CNT mirror technology is being advanced in part through a $125,000 Small Business Innovation Research (SBIR) project awarded to Lightweight Telescopes last year.

“This new [telescope mirror] technology is based on CNTs, assorted powders and fibers, polymers, and proprietary processes to craft precisely shaped and super-smooth UVOIR optical surfaces,” states the abstract to that award. 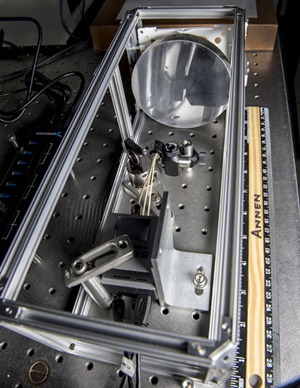 The abstract goes on to say that the CNT mirror technology is “almost market ready”, and could also feature in commercial deformable mirrors, as well as telescopes typically used by amateur astronomers, and even meter-class telescopes for smaller college-level observatories.

The NASA team points out that for deformable CNT mirrors, actuators could be incorporated into the optical component during fabrication, by applying electric fields to the resin mixture before it is cured.

That leads to the formation of CNT chains and networks, while after curing technicians can apply power to the mirror, changing the shape of the optical surface – a concept already demonstrated in the laboratory.

There, a team from the European Space Agency reported on two different research efforts towards deploying active optics in space for both high-resolution Earth observation, and exoplanet characterization.

Meanwhile NASA’s Wide-Field Infrared Survey Telescope (WFIRST) mission will feature two deformable mirrors. The 2.4 meter primary will be used to collect light from hundreds of millions of galaxies to aid the study of dark matter, as well carry out exoplanet spectroscopy.

Other CubeSat technologies under discussion in Edinburgh included a diffractive optical element in the form of a “sieve” membrane that could be deployed in space.

According to Geoff Andersen from the US Air Force Academy (USAF) team developing the technology, the 28 µm-thick Katpon membrane, which features millions of holes, costs virtually nothing to make – once a lithographic master design has been produced - and has a major advantage in that it does not need to be perfectly flat.

Although the membrane will not fly in space until March 2017, it has experienced microgravity conditions on a “vomit comet” airplane trip, where it was deployed from a CubeSat by USAF researchers (see Youtube video below). Initial objectives for the approach are modest – the first launch will only look to take a solar image at the H-alpha line – but in the future there is the possibility of using the technology for Earth observations.

Also in Edinburgh, Anthony Horton from the proposed “Australian Space Eye” project described how CubeSats could be used to aid the study of galaxy formation.

Based around a near-infrared image sensor, a two-star tracker and a three-axis MEMS gyroscope for pointing stability, the approach has been submitted for three-year development funding with a view to a possible launch in the second half of 2019.