Harvard project designs a lens able to form two images of opposite helicity from the same subject. 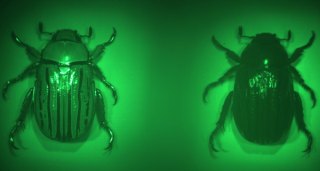 Resolving the polarization of light scattered from many biological structures is an important part of analyzing their nature and function.

But doing so has previously required a complicated optical arrangement, usually involving beamsplitters or waveplates and stacking multiple items together into a singly bulky system, which can degrade the final image quality as well as being expensive and difficult to use.

A team led by Federico Capasso at Harvard has now developed a possible answer, by designing a multispectral chiral lens (MCHL) that integrates the functionality of both polarization and dispersive optical components into one device. This means it can deliver chiral and spectral information simultaneously about an object, potentially for use in imaging and spectroscopic examinations where resolution would be limited only by the numerical aperture of the MCHL.

The breakthrough, published in Nano Letters, stems from the application of a metasurface to the lens. These materials, of which Capasso is a highly regarded pioneer, are a range of ultrathin optical structures able to effect significant changes to the phase, amplitude or polarization of light over a small distance - typically within the normal wavelength of the light.

Most are formed from arrays of miniature anisotropic light-scattering structures, spaced more closely together than one wavelength of the light which is being modified.

The Harvard lens is described by the project team as consisting of two arrays of titanium oxide "nanofins" on one glass substrate, which between them create the phase profile needed to focus light of different polarization: one array focuses right-circularly polarized (RCP) light, while the other separately focuses left-circularly polarized (LCP) light. This means the lens effectively forms two images of opposite chirality, and displays them side-by-side.

Unprecedented capabilities
"For the first time, chiroptical properties can be probed across the entire visible spectrum using only a single planar lens and a camera without the addition of other optical components, said Capasso. "We have demonstrated the potential of metalenses in realizing a compact and multifunctional device with unprecedented chiral imaging capabilities."

Images produced using the new lens duly revealed details of the beetle's exoskeleton which were less apparent or invisible when the same specimen was examined under red or blue illumination.

When the lens is used to photograph an object which reflects both LCP and RCP light equally, two identical images are produced - as would be expected, although under the new lens this behavior can itself provide proof of the subject's non-chirality.

One key feature of the new lens is its small size - only 3mm in diameter - which should make it straightforward to incorporate into portable devices. The team predict that the MCHL could find widespread uses in numerous fields, ranging from biology and pharmacology to environmental and remote sensing.

"Our work is an unprecedented demonstration of a multifunctional metasurface," said Reza Khorasaninejad of the Capasso Lab. "We showed that an ultrathin surface can both form an image and simultaneously resolve both polarization and spectral information of a biological specimen."