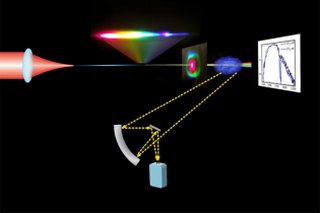 Plasma filaments: analysis at a distance

Applying the right kind of ultrafast laser at the right power levels can ionize the air into filaments of plasma, thanks to a non-linear process that corrals the optical pulses into self-contained volumes of open atmosphere potentially extending for some distance.

The possible appeal of this effect for remote sensing or LIDAR has been recognized for some time, since the broadband supercontiuum light that it generates covers a wide spectral range, and overcomes diffraction over longer distances than conventional processes based on linear beam propagation.

To date, most of the experimental work on filament creation has used visible or near-infrared illumination, where sources in the necessary high-energy short-pulse regime are readily available. But producing the same effect with mid-IR sources instead could allow it to detect the presence of airborne chemicals and pollutants such as carbon dioxide and ammonium, by revealing their spectral fingerprints.

A project lead by researchers at MIT has now demonstrated mid-IR filamentation in air for the first time at kilohertz repetition rates, according to results published in Optica.

The team believes that only one previous research effort has ever succeeded in generating the same effects - and then only at much slower repetition rates of around 20 pulses per second, making the new study one of the first investigations of self-channeling ultra-intense mid-IR laser pulses in the air.

"People want to use this kind of technology to detect chemicals in the far distance, several kilometers away," said Kyung-Han Hong of MIT's Research Laboratory of Electronics, pointing out that one key to this team's success was the use of a high-power 30-femtosecond source coupled with a parametric amplifier.

New frontier
This new system architecture yields "one of the highest peak-power levels in the world" at these mid-IR wavelengths, according to Hong, and is theoretically capable of producing 100 gigawatts of peak power.

The power threshold for generating the plasma filaments in air at mid-IR wavelengths is about 45 GW, and according to the Optica paper the team's experiments produced a peak power level of 52 GW - more than sufficient to provide the critical self-focusing behavior at the 2.1-micron wavelength employed.

With the principle now proven, the intention is to investigate how spectrally broadened mid-IR laser filaments can reveal the presence of specific molecules in the air, including various biohazards and pollutants, by identifying the exact color of the filament. In the Optica study the team detected atmospheric carbon dioxide over relatively short distances, but there should be no reason why the same approach cannot now be applied at larger scales and to different chemical species.

Commenting on the results, Pavel Polynkin of the University of Arizona said that exploration of the mid-IR spectral domain is likely to be a new frontier in ultrafast laser science.

"The extension of intense atmospheric propagation regimes into the mid-IR spectral range certainly holds a lot of promise to overcome the limitations associated with the very well-explored near-IR spectral range, namely the very unstable propagation dynamics," he noted. "The authors tapped into a new domain of intense non-linear optics. Without a doubt there will be follow-up work."