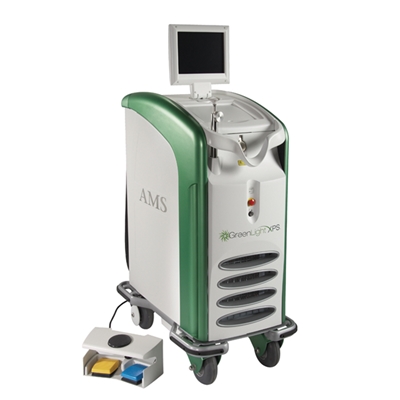 The UK’s National Institute for Health and Care Excellence (NICE), the authority that determines which types of treatments should be adopted by the National Health Service (NHS), is recommending a laser treatment for the condition benign prostatic hyperplasia (BPH) in low-risk patients.

Extremely common in older men, BPH is not an indication of cancer but the symptoms caused by the enlarged prostate gland – difficult and frequent urination - can have a significant impact on quality of life.

In the UK the standard treatment for BPH is transurethral resection of the prostate (TURP), where excess tissue is removed with a wire loop heated electrically.

After studying clinical evidence NICE says that Boston Scientific’s “GreenLight XPS” system is at least as effective as TURP, and could save the NHS around £3 million every year because, unlike TURP, patients treated with the laser would not usually need to remain in hospital overnight.

“The case for adopting GreenLight XPS for treating BPH is supported in non-high-risk patients,” said NICE, although it also said that there was not yet sufficient evidence to support adopting the same technology in high-risk patients, for example those on blood-thinning drugs and at a higher risk of bleeding, those with particularly large prostates, or with urinary retention.

Laser options
The Boston Scientific system is based around a frequency-doubled solid-state laser operating at 532 nm. Directed through an optical fiber, the beam vaporizes part of the enlarged prostate, leaving a clear urethral channel and thereby easing the patient’s difficulty with urination. The same laser can also be used to cauterize bleeding tissue.

The technology – originally launched by Boston Scientific more than a decade ago - is different to other laser systems used in prostate treatment that are based around a holmium source emitting at 2.1 µm. According to NICE the green wavelength is preferentially absorbed by oxyhemoglobin in blood and tissue, ensuring that no fragments are left behind.

However, proponents of the holmium laser alternative such as medical laser firm Lumenis say that the advantage of the longer wavelength is that it is strongly absorbed by water – meaning that the beam does not penetrate as far into tissue and helps to reduce any collateral damage.

Part of the attraction of the Boston Scientific system is that its power has been upgraded from an initial 80 W, with the company introducing the 180 W GreenLight XPS in 2010.

“This allows procedures to be done on larger prostates in less time,” said NICE, adding that although the procedure time will typically be a few minutes longer than with TURP, the reduction in overnight stays could save the NHS £3.2 million every year.

Interestingly, the payment model offered by Boston Scientific means that the laser console is provided at no cost to the NHS. Instead, a minimum purchase of laser fibers is agreed contractually, at an average price of £550 per fiber. One fiber is used per patient normally, although those with particularly large prostates may require two.

Lasers treat prostate cancer
Meanwhile in the US, a research team at the University of California, Los Angeles (UCLA) Ronald Reagan Medical Center have just completed a pilot study on a new laser ablation treatment for men with “intermediate risk” prostate cancer.

Leonard Marks and colleagues tested the approach on eight patients and performed follow-up tests including MRI-ultrasound biopsies six months later. They found that seven of the eight men showed a decrease in prostate-specific antigen levels, while five of the eight showed no cancer in the laser ablation zone. However, six of the patients did show signs of cancer outside of the treatment margin.

“Focal laser ablation of the prostate is feasible and safe in men with intermediate-risk prostate cancer without serious adverse events or changes in urinary or sexual function at six months,” concluded Marks and colleagues in their Journal of Urology paper, though they added: