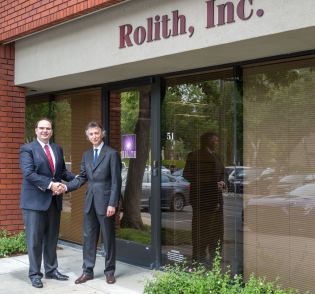 MTI board chairman Maurice Guitton indicated that the deal was intended to accelerate the company's ability to develop metamaterial products for diverse markets, and help address the current absence of viable manufacturing tools for large-scale high-volume optical metamaterials.

"Rolith's existing business line and RML technology will complement MTI's capabilities and extend its market offerings," he said. "This acquisition will establish the company as a forerunner in the industry and will enhance future growth and performance."

MTI's work on metamaterials includes using them to block, enhance or otherwise selectively modify incident light. The company's Lamda Guard material, engineered to deflect light of specific wavelengths in order to provide vision protection against harmful intense laser strikes, was the subject of a 2014 partnership between MTI and Airbus in which the thin-film technology was tested on cockpit windscreens. This was described as a "milestone in optical applications of nano-composites" by the partners, and said to be the first time such an optical metamaterial nano-composite had been applied on a large-scale surface.

Parallel Patterning
Other MTI technologies include Lamda Lux, designed to enhance the output and efficiency of LED lighting through the addition of a layer of metamaterial film. According to MTI data, Lamda Lux film uses a nano-cavity lens structure to amplify light production from any diode, making it applicable to existing light sources.

The company has also developed thin-film metamaterials able to boost the efficiency of solar panels by capturing sunlight from wider incident angles than untreated panels. Lamda Solar films could potentially double the power absorption of solar panels while also reducing total panel area requirements. MTI describes Lamda Lux and Lamda Solar technologies as being in the final stages of development.

Rolith was founded in 2008 by engineers from Stanford University* to exploit a proprietary technology for large-surface-area lithography, allowing the manufacture of nanostructures to be carried out in a cost-effective manner. Its IP is said by the company to cover the nanolithography technique, mask fabrication methods, and certain nanophotonics and data storage applications.

The RML technology was developed in partnership with SUSS MicroTec, as reported previously on Optics.org. It employs a massively parallel patterning scheme, designed to be scalable to large areas of rigid substrate materials and rolls of flexible films, and Rolith has said that implementation of its phase-shift mask approach and plasmonic printing allows the creation of structures with feature sizes down to 50 nm.

Boris Kobrin, Rolith founder and CEO, welcomed the new acquisition deal, saying that "MTI is now well positioned to be a leader in the commercialization of metamaterial optical products."

* clarification (June 2): Rolith was founded by Boris Kobrin, Julian Zegelman and Mark Brongersma. Only Brongersma is from Stanford University.