At almost 90m, a Yellow Meranti is the tallest jungle tree ever discovered in reforestation research project. 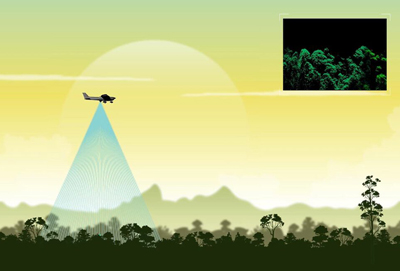 An 89.5m (293 foot) tall tree, equivalent in height to a column of 65 people standing on top of each other, has been discovered in Malaysia by conservation scientists using a laser-based system to monitor the impact of human activity on the biodiversity of a pristine rainforest.

The tree, a Yellow Meranti (familiar to Minecraft players, who can create entire jungles of the variety) was spotted by a aircraft-borne lidar system an area of forest known as “Sabah’s Lost World” in the Maliau Basin Conservation Area, one of Malaysia’s last few untouched wildernesses. Its height pips the previous record-holder, an 88.3m example, found in the Tawau Hills National Park.

The giant tree was discovered during reconnaissance flights by conservation scientists from the UK’s University of Cambridge working with the Sabah Forestry Department to help protect the area’s biodiversity. It comes at a crucial time, as the Sabah government takes measures to protect and restore heavily logged areas in the region. 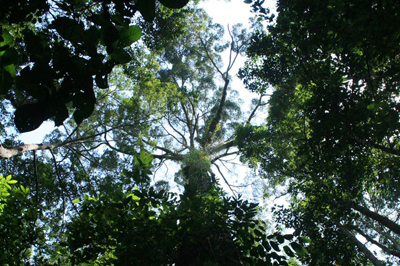 Measuring a tree’s exact height is problematic when the tree is quite possibly the tallest tree in the Tropics. The only way is to climb it, and to take a tape measure. This is precisely what Unding Jami, an expert tree-climber from Sabah, did recently. When he reached the top, he confirmed the tree’s height and texted, “I don’t have time to take photos using a good camera because there’s an eagle around that keeps trying to attack me and also lots of bees flying around.”

The tree actually stands on a slope: downhill it measures 91m tall, and uphill 88m. “We’d put it at 89.5m on average,” said lead researcher Dr David Coomes, from Cambridge’s Department of Plant Sciences. “It’s slightly taller than the previous record, which makes it quite probably the tallest tree recorded in the Tropics.”

He added, “At this height, the tree is roughly equivalent to the height of 65 people standing on each other’s shoulders, or 20 double-decker buses. It’s just a few meters short of London’s Big Ben clock tower. Trees in temperate regions, like the giant redwoods, can grow up to 30m taller; yet around 90m seems to be the limit in the Tropics. No-one yet knows why this should be the case,” added Coomes. 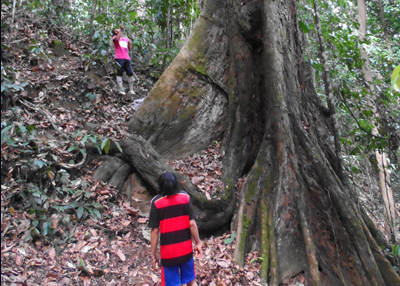 The tree was spotted using a LiDAR scanner – a laser-based analyzer that produces detailed three-dimensional images of rainforest canopies over hundreds of square kilometers. Its laser range finder hangs from the undercarriage of the research plane, scanning the forest with 200,000 laser pulses every second, and calculating distances in 3D from each reflected pulse. The researchers then “stitch” the images together, enabling them to map the forest tree by tree.

Threatened by habitat loss, the Yellow Meranti (Shorea faguetiana) is classified as endangered on the International Union for Conservation of Nature’s “Red list”, the world's most comprehensive inventory of the global conservation status of biological species.

“Interestingly, there may be more of this tree in cyberspace than in the world. It’s one of the trees that players can grow in the computer game Minecraft,” said Coomes. “Conserving these giants is really important. Some, like the California redwoods, are among the largest and longest-living organisms on earth. Huge trees are crucial for maintaining the health of the forest and its ecology. But they are difficult to find, and monitor regularly, which is where planes carrying LiDAR can help.” 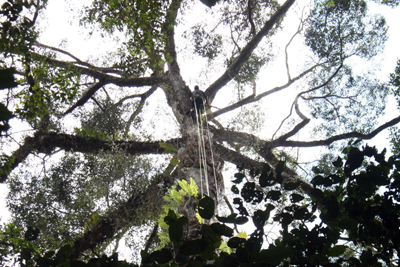 Globally, around one billion hectares of degraded forest might be restorable, enabling then to continue to contribute to the planet’s biodiversity and its carbon and water cycles. However, a major problem faced by conservation managers is how to survey extensive areas in which conditions can vary in just a few hundred square metres and are continually changing through natural regeneration. “LiDAR scanning together with digital photography and hyperspectral scanners now provide us with unprecedented information on the state of the forest,” explains Coomes.

“The Sabah government is extremely proud of this discovery, which lays credence to the fact that our biodiversity is of global importance,” said Sam Mannan, Director of the Sabah Forestry Department. “Our international collaboration, as in this case, has brought great scientific dividends to the state and we shall continue to pursue such endeavours.”

Coomes concluded, “The discovery of this particular tree comes at a critical moment because, set against a backdrop of decades of forest loss, the Sabah government has decided to protect and restore a huge tract of heavily logged forest just to the east of the Maliau Basin. It’s exciting to know that these iconic giants of the forest are alive and well so close to this major restoration project.”