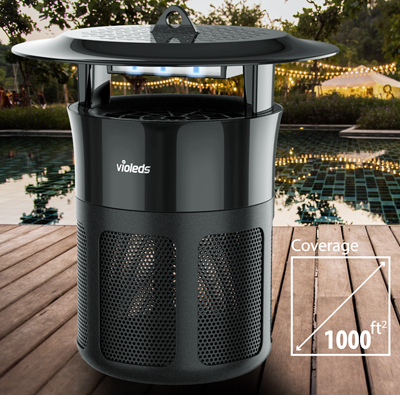 Mosquito trap: a violeds system from Seoul Viosys based on UV LEDs.

A partnership between Seoul Viosys and Sensor Electronic Technology, Inc. (SETi), both developers of UV LEDs and associated systems, has resulted in the first in a product in the proposed “violeds“ range of mosquito traps. The violeds technology-based Mosclean uses UV LEDs and a coating that produces carbon dioxide through a catalytic process.

The partners say that the traps could reduce the spread of the Zika virus, which is currently causing birth defects and major concern in parts of south America and further afield.

The combination of specially-tuned light in a peak visual range for mosquitoes and carbon dioxide are highly effective in attracting and catching mosquitoes, say the partners. In fact, independent studies show the LEDs used in the Mosclean mosquito trap are highly effective against the Yellow Fever mosquito (Aedes aegypti) and the Asian Tiger mosquito Aedes albopictus, which are widespread species known to carry and transmit Zika, Dengue, and Chikungunya viruses.

Dr. Philip Koehler, Ph.D, a leading authority in the field of mosquito control, at the University of Florida, recently announced, after a series of trials conducted in his laboratory, that when tested against traditional UV traps, the Mosclean consistently showed over 10 times the conventional performance in capturing Aedes aegypti, the main vector of Zika virus.

“Recent experiments conducted in our lab have confirmed that Mosclean UV LED trap captures significantly more mosquitoes capable of vectoring Zika virus than competing products. These results show that the system could ultimately help protect people as we continue to work on reducing the numbers of biting mosquitoes that transmit this important and debilitating disease.”

Another leading authority in entomology, Dr. Daniel Rubinoff, Professor in the Entomology Program at the University of Hawaii, who has also recently conducted independent research experiments at the University of Hawaii, commented, “Mosclean was highly effective capturing the Zika virus-transmitting mosquito species, along with other mosquito species which are prevalent in both residential and outdoor environments today.”

In a recent white paper, Dr. Rubinoff referred to an independent research project conducted at the University of Kosin by one of the most renowned entomologists in Korea to confirm that Mosclean trapped more mosquitoes than the traditional lamp based mosquito traps that are available in the marketplace today.

The need for effective mosquito control was made apparent recently, when the problems with Zika virus hit the news, but according to World Health Organization, mosquitoes have long been an issue and are the most deadly animal on the planet, causing more than 725,000 deaths every year due to mosquito-transmitted diseases such as Malaria, Dengue virus and Japanese Encephalitis. Since the launch of the Mosclean systems at the end of April it has been reported (BBC) that the threat posed by the Zika virus is even greater than was previously feared.

Traditional mosquito control solutions include expensive carbon dioxide traps, chemical sprays that may harm beneficial pollinators (bees), and noisy, smelly insect “zappers” that attract mosquitos and many other beneficial insects into a high voltage metal grid using a UV “black light” bulb. Designed around the violeds technology and using LEDs instead of a traditional UV “black light” bulb, the Mosclean is safe, environmentally friendly and cost effective with no replacement bulbs or consumables.

Dr. Yoon Yeojin, Vice President of Seoul Viosys’ UV Development Center, said, “the Mosclean has been developed using LEDs that emit a certain wavelength of UV light that is highly effective for mosquito capture, while remaining perfectly safe to the user. We’ve also added a special coating that when used with the LEDs emits carbon dioxide to further increase the performance of the Mosclean”.