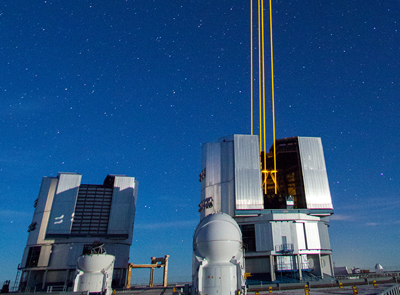 SodiumStar laser beams are visible up to a height of a few tens of kilometres.

During the verification phase, a team of Toptica and ESO engineers successfully completed the required system tests. The team says this is a major step towards the completion of the Adaptive Optics Facility and confirms the capability of Toptica’s guide star solution.

Four independent lasers are used simultaneously to implement advanced modes of adaptive optics. The laser light is absorbed and re-emitted by sodium atoms in a layer at the edge of the mesosphere, about 90–110 km above earth’s surface. On its return to the telescope, the re-emitted fluorescence light experiences the same atmospheric distortions as the light arriving from real stars.

By this means, the point-like fluorescence light of a laser guide star can be used to measure the atmospheric image blurring effects and compensate them with a deformable mirror in the telescope.

Using several lasers, the air volume above the telescope’s main mirror is probed in a process called atmospheric tomography. This enables near-diffraction-limited images of the complete field of view and even better resolution for smaller fields of interest.

The new AOF will allow the exploration of extragalactic galaxies and will also be an important milestone for the ongoing implementation of the 40m European Extremely Large Telescope on neighboring Cerro Armazones. 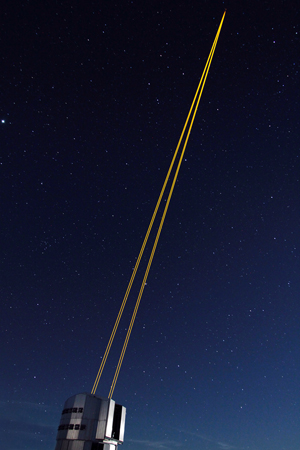 Toptica President Wilhelm Kaenders commented, “The new lasers can be considered the third generation of sodium guide star laser technology, bringing laser schemes from quantum optics to astronomy. With our novel repumping approach we can by far surpass existing sources in their key parameter for this application, the fluorescence photon return flux.”

Each laser delivers 22W of diffraction-limited, narrowband, continuous-wave radiation at a sodium resonance near 589 nm, including up to 12% of the power at a second repumper frequency.

This is achieved by amplifying the output of a wavelength-stabilized quantum dot DFB diode in a narrow-band Raman fiber amplifier and subsequent frequency-doubling by resonant second-harmonic generation with up to 90% efficiency.

Toptica says the superior performance of this laser has been independently confirmed recently at several telescopes and in direct comparison with legacy technology. Detailed results will be published at SPIE’s Astronomical Telescopes and Instrumentation conference in Edinburgh between 26 June - 1 July 2016.