Pattern-recognition technique does not rely on fluorescent labeling and works with tiny sample volumes. 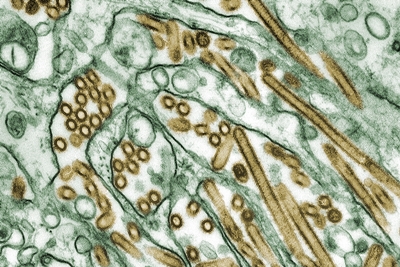 by Ford Burkhart in Baltimore
Hope for new tools to fight the next global flu outbreak was offered on Monday at the SPIE Defense and Commercial Sensing (DCS) meeting in Baltimore.

A paper described new chips that can more efficiently distinguish new and unknown strains of influenza as the virus mutates in animals during any particular outbreak.

The new technology for serology can reveal extra information about an influenza sample, showing that as it has mutated it now lies on a continuum between two known influenza strains, say, between a known H7 and another known H7 strain.

“The chip could work on any sample with a hemagglutinin,” said Benjamin L Miller, of the University of Rochester Medical Center’s department of dermatology. He spoke at a session on Integrated Photonics Sensing of Chemical, Biological, Radioactive and Nuclear Threats.

The idea is to generate a culture sample, expose it to the chip, and then rinse, dry and image it. The new optical biosensor uses a label-free-array approach (meaning that it would not be necessary for the test to include a fluorescent label to identify the virus on the chip). “We don’t have any of that,” Miller said. The chip can make use of tiny sample volumes, perhaps just ten microliters of serum.

Then the team looked at samples of wild mallard ducks. It was able to learn the history of their influenza exposure, and which antibodies they carried from their exposure to the flu virus.

Since all human flu originates from animal sources, it is vital to discover which new strains are being carried - often by birds and pigs. There is a large global flu surveillance community looking at various animals to identify new strains.

In field samples, the amounts of serum obtained from ducks were very small. “You can only get so much serum out of a bird,” Miller said. But the team’s efficient chip was able to deliver an analysis with only ten microliters of serum.

Recognizing mutations
In the 2015 influenza outbreaks in the United States, some vaccines were shown to be only 23 per cent effective. One problem then was that the flu virus continually mutated, and detecting those changes before the strain reaches the general population is important so that the medical community can know what the vaccine strain ought to look like, Miller said.

“It’s important to recognize the ‘unknown’ influenza virus strains,” he added. The Rochester team’s chip uses a pattern-recognition approach but, as Miller stressed, these are very preliminary results. “There’s a lot of work to do,” he said. “Pattern recognition applied to this sort of virus detection is new, using known virus strains, and being able to locate one between the known strains shows its lineage and how it will behave.”

The company ADARZA Biosystems, of St. Louis, Missouri, is supporting the work, along with the US National Institutes of Health. “Our hope is that in survey applications with antigen chips, we will be able to start using it right away,” Miller said. He said the early versions of the chip are being created in his lab at the University of Rochester.