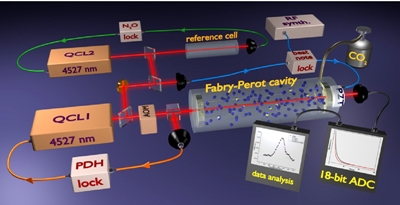 A new approach to cavity-ringdown optical spectroscopy could offer a faster, cheaper and highly sensitive alternative to the conventional method for carbon dating.

Parts-per-quadrillion sensitivity
While the ringdown approach, which is based on multiple reflections of laser light between two highly reflective mirrors to create an extremely long path length and a stronger absorption signal, is not new, an improved “SCAR2” setup has greatly enhanced its sensitivity.

Writing in the OSA journal Optica, Davide Mazzotti and colleagues at the Istituto Nazionale di Ottica (INO) in Florence report the measurement of radiocarbon concentrations in CO2 gas of just a few parts per quadrillion.

That is close to the kind of radiocarbon sensitivity offered by mass spectrometry, the technique normally used for carbon dating. However, the large accelerator mass spectrometers (AMS) needed to do that are complex and expensive pieces of equipment, and remain the preserve of approximately 100 specialist laboratories around the world.

AMS can be used to carbon-date bones, wood, fabrics - or anything of biological origin – originating from up to 50,000 years ago. Any older than that and the level of the 14C isotope, which has a half-life of 5700 years, is reduced to zero. Researcher Iacopo Galli from the INO team said: “Using our new technique, we can do something similar but with a lower cost and with a faster delivery time for the results.”

While the SCAR2 equipment is currently tabletop-sized, the INO team believes that it could be converted into a portable commercial prototype. That kind of convenience would allow direct carbon-dating measurements to be conducted on-site, with results returned in just a couple of hours. Galli said: “This could revolutionize the approach that archaeologists use for carbon dating because they would not have to send sensitive samples away to a lab and wait weeks for a result.”

SCAR2: redesigned from scratch
In their journal article, the INO team describe how they redesigned the SCAR technique “from scratch” to achieve the much higher sensitivities. Among the new features are cryogenic cooling of the ringdown cavity down to 170 K, and more reflective zinc selenide mirrors.

“Thanks to the improvement of the mirrors’ reflectivity, with an unchanged cavity length [1 meter], the effective interaction path is about 5.2 km, 40 per cent longer than in SCAR1,” they report.

The laser system has also been updated, with 100 mW power QCLs now employed and a frequency stabilization chain used to narrow and closely control the frequency of the probe beam. An indium antimonide photodiode detects the faint ringdown signal.

All those improvements resulted in more than an order-of-magnitude enhancement to sensitivity, states the INO team.

They point out that as well as carbon-dating, the technology could be used in climate studies. That’s because it is possible to discriminate between carbon dioxide from fossil fuel sources – whose levels of the radioactive 14C isotope would be fully depleted – and bio-fuels.

In fact, the SCAR2 technique could be applied to any molecule with sufficiently strong absorption at wavelengths accessible with available laser sources. “This greatly widens the range of applicability of our technique, encompassing fields such as security, biomedicine, and environment,” the INO researchers conclude.

The next steps for them include conducting SCAR2 analyses of archaeological artefacts and biofuels, and directly comparing these measurements with AMS results from the same samples.