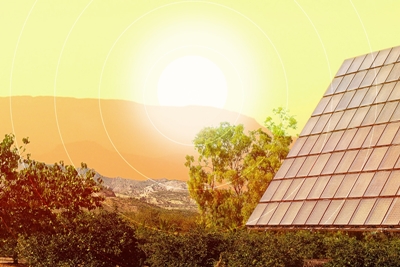 by Pini Salvodor
Researchers have discovered what appears to be the “holy grail” of photovoltaics – a new semiconductor material capable of converting the entire solar spectrum into "green" electrical power with 100% efficiency.

The team, a multinational collaboration, reported its findings this morning in the Journal of Solar Materials. In the paper, they describe their accidental discovery of a completely new semiconductor material based on a combination of the noble gas argon and the semiconducting non-metal element selenium - caused when an argon gas cylinder leaked over a large bowl of brazil nuts whose selenium content was being analyzed by food researchers.

“It’s unbelievable,” said principal investigator Olaf Pirlo. “This is the renewable energy breakthrough that the whole world has been hoping for. The efficiency of our ArSe-based solar cells outperforms that of every other known photovoltaic material by a factor of at least two.”

The astonishing efficiency performance has since been confirmed at the UK’s National Sunshine Laboratory, which is based in Manchester.

Sunshine indoors
Up until now, the highest recorded efficiency from a research-grade solar cell stood at 46 per cent, set in late 2014 by a team from Soitec alongside the Fraunhofer Institute for Solar Energy Systems (ISE) in Freiburg.

But the new cell is set to head straight to the top of the famous US National Renewable Energy Laboratory (NREL) chart of high-performance devices, and in the longer term the disruptive technology promises to turn the solar power industry upside down – if it can be produced cheaply and in commercial volumes.

Pirlo is extremely confident about that, partly because the new material can simply be sprayed or painted onto any suitable substrate material. The unusual combination of chemical elements means that ArSe exists in a convenient liquid form at room temperature, leading Pirlo’s team to dub the semiconductor “liquid sunshine”.

And because the material is particularly good at converting warm-white light into electricity, it will also suit interior applications, effectively bringing - in Pirlo's words - "sunshine indoors".

He is currently in negotiations to secure the funding needed to construct a fabrication facility to make large solar panels based on the material, with volume production tentatively scheduled to start next April.

At that point Pirlo and his colleagues are planning to sell the revolutionary technology direct to customers via a web portal owned and operated by their spin-off company "MyArSe".