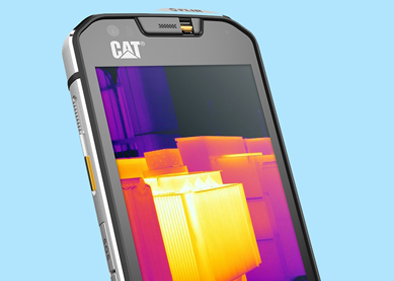 Flir Systems has announced that Bullitt Group, a manufacturer of ruggedized smart phones, is to integrate Flir’s Lepton microcamera in the new Cat S60 phone, creating what the partners are calling “the world's first thermal imaging Smartphone".

The Cat S60 Smartphone, part of the range of ruggedized Cat Phones handsets, is the latest consumer product to feature Flir's thermal imaging technology and was unveiled this week at Mobile World Congress 2016 in Barcelona, Spain.

Leveraging Flir’s Lepton core, claimed to be the world's smallest and cheapest microbolometer-based thermal imaging camera, the Android-based Cat S60 Smartphone is said to expand the capabilities of a Smartphone. Flir says, “With the ability to visualize heat that is invisible to the naked eye, the Cat S60 allows users to measure surface temperature from a distance, detect heat loss around doors and windows, spot moisture and missing insulation, making it the ideal Smartphone for building professionals, electricians, and first responders.” 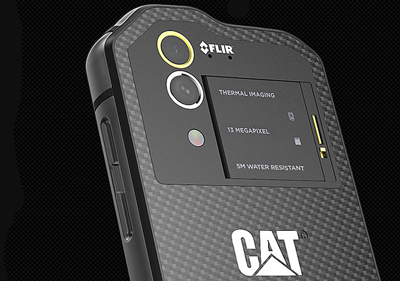 Based on Flir’s Lepton core, the microbolometer-based thermal imaging camera.

"We're excited to partner with Bullitt to create the world's first Smartphone with integrated thermal imaging,” said Andy Teich, President and CEO of Flir. "We have achieved significant reductions in size, weight, power, and cost of thermal cameras and the Cat S60 represents yet another application for our technology.”

Peter Stephens, CEO Bullitt Group, a global licensee for Caterpillar, said, “We are excited for thermal technology to now be in the hands of Cat phones' customers, who have the opportunity to discover the myriad of daily time and efficiency use cases it will present for them.”

The partners say the Cat S60 is “ideal for builders, electricians, emergency services, utility workers, among others. Its thermal camera has applications in detecting heat loss around windows, spotting moisture and identifying overheating appliances, for example.”

The phone is a ruggedized Smartphone, featuring a Corning Gorilla Glass 4 touchscreen. It also exceeds military specifications and is designed to withstand drops onto concrete from up to 1.8m. It is also waterproof to depths of up to 5m for one hour, meaning it can be used as a reliable underwater camera. 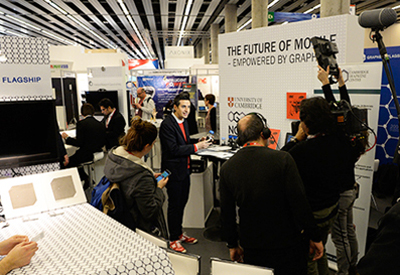 The Graphene Flagship stand at MWC this week.

Also appearing at this week’s Mobile World Congress in Barcelona, the Graphene Flagship, the EU’s largest research initiative has been hosting the inaugural Graphene Pavilion. This exhibit showcased the latest graphene-based innovations from both academia and industry with numerous prototypes and demonstrations.

The Graphene Pavilion, jointly operated by the Graphene Flagship, ICFO and mobile industry association GSMA included live demos and prototypes of many different properties and applications.

A notable attraction on the Flagship stand was that delegates had the opportunity to make their own graphene sample, while visiting some of the leading players in the field. These included Aixtron, AMO, Avanzare, BGT Materials, FlexEnable, GNext, Graphenea, Libre SRL, nVision and Zap&Go, alongside academic institutes such as University of Cambridge, Chalmers University of Technology, University of Manchester, ICFO, Catalan Institute of Nanoscience and Nanotechnology, National Research Council, Institute of Electronic Materials Technology and the Italian Institute of Technology.