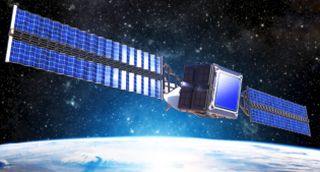 The size and weight of advanced astronomical telescopes pose a constant challenge to engineers aiming to launch them into Earth orbit, so any routes to improve matters without compromising on performance is potentially attractive.

A collaboration between the University of California, Davis, and Lockheed Martin is currently developing a novel optical design of telescope that should be much lighter in weight and smaller in size than competing approaches, making it easier to launch and position.

Rather than employ conventional optics and mirrors, it uses instead a large number of tiny individual lenses focusing the collected light onto silicon-chip photonic integrated circuits (PICs), of a type developed by Ben Yoo and his group at UC Davis. Combining the light from pairs of lenses produces interference fringes, which the PICs use to reconstruct a digital image of what the telescope sees.

"A nanophotonics waveguide array in a PIC maps the collected photons onto detectors that measure amplitude and phase at a pupil plane, and image reconstruction algorithms are used to compute an image from measured complex visibilities," said Alan Duncan of Lockheed Martin. "Each 'blade' of PICs samples a linear swath in the spatial frequency domain, with multiple PIC blades arranged in a disk geometry offset in azimuthal angle."

Among other advantages, this concept should produce a high-resolution result even while maintaining a thin disk of PICs, and do so without the same complex alignment requirements of large lenses and mirrors.

Although imaging interferometer arrays currently exist at multiple sites, including CHARA at Mount Wilson in California, and NPOI at Lowell Observatory, Arizona, these instruments employ a small number of interferometer channels with very long baselines and vacuum delay lines to interfere the light. They take advantage of the earth's rotation to slowly collect enough data for a uniformly sampled spatial frequency domain, and use that to form an image.

"SPIDER forms images in a similar way, but contains many individual interferometer channels on a much more compact scale, which collects all the required data simultaneously," said Duncan.

Next-generation PICs
The key enabling technology is the capability to fabricate very high density waveguide arrays in photonic integrated circuits - one of the Yoo group's areas of expertise. 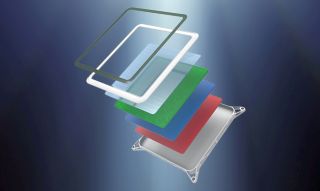 PICs: photonic integrated circuits are the key to SPIDER

At present, the density of waveguides and the depth that the waveguide layers can be written into the PIC substrates imposes one potential barrier on the concept, limiting the field of view - and hence image size - to small values. But enhanced fabrication technologies are emerging and expected to mature rapidly, allowing higher field-of-view imaging sensors to become viable.

While the SPIDER prototype today employs fewer than 100 waveguides, Yoo expects that future generations of PICs will feature highly functional and densely integrated systems. Those circuits could be manufactured using three-dimensional laser inscription, in which an ultrafast source writes waveguides of any desired shape within a solid piece of glass.

And the prototype has already demonstrated the potential benefits of the SPIDER concept, given that the cost of imaging payloads in space is strongly driven by the dimensions and scope of their optics. Although astrophysics applications that require large collecting apertures to image distant point-like objects may not benefit greatly from a SPIDER approach, earth-observation (EO) systems could be a different story.

"SPIDER can significantly reduce the size, weight and power requirements of a telescope, by factors of between ten and 100, alongside similar reductions in fabrication, integration and test schedules," commented Duncan. "The result will be substantially lower-cost imaging sensors, particularly for EO space applications or orbiting planetary missions in our solar system."

"The development timeline is critically dependent on the PIC fabrications technology, which is being driven by commercial applications for very low power chips, primarily for mobile CPUs and larger server-farm applications," said Duncan. "We expect to be able to fabricate competitive imaging sensors in five to ten years."