LIGO: 'That's the chirp we've been looking for'

Scientists reveal how two giant laser interferometers in the US have been able to ‘hear’ gravitational waves produced by the collision of two black holes.

Scientists at the two Laser Interferometer Gravitational Wave Observatory (LIGO) sites in the US have confirmed rumors that the laser-based installations have detected gravitational waves for the first time.

Remarkably, the 4 km-long arms of the giant interferometers in Hanford, Washington, and Livingston, Louisiana, picked up the “chirping” signal – generated by the collision of two black holes 1.3 billion years ago – just weeks after the LIGO equipment had been upgraded to detect fainter signals.

The discovery simultaneously confirms the existence of gravitational waves as predicted by Einstein’s century-old general theory of relativity, and opens up an entirely new field of astronomy that will complement optical, radio-frequency and X-ray observations.

Listening to the universe
Addressing the world’s media and more than 90,000 watching online David Reitze, executive director of LIGO at the California Institute of Technology, said: “For the first time, the universe has spoken to us through gravity waves. We’ve been deaf, but now we can hear.”

Gabriela Gonzalez, who is based at the Louisiana interferometer installation, played an audio clip of the gravity-wave signal, urging the audience to listen for a “chirp” amid the noise, saying: “That’s the chirp we’ve been looking for.”

Gonzalez explained that the signal corresponding to the ripples in space-time arrived at Earth September 14 – shortly after LIGO had been upgraded and before its scientists had even begun their official runs. Those ripples warp space-time in such a way that for a brief period one of the interferometer arms is slightly longer than before.

And although that change is tiny, equivalent to just 10-18 meters even over the length of the 4 km arms, the laser and optical equipment at LIGO is now sensitive enough to pick it up. “It’s the most precise measurement device ever built,” said Reitze.

Luckily enough, as he explained, the interferometers were at that time in an engineering test phase, and able to pick up the chirping signal anyway. That signal was detected by the Louisiana interferometer first, just 7 ms before a near-identical signal arrived at Hanford. 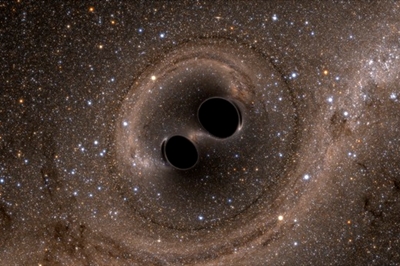 Kip Thorne: more signals expected
Famed Caltech theoretical physicist and LIGO co-founder Kip Thorne noted that the signal could almost have been picked up by LIGO before its upgrade, which improved sensitivity by a factor of three with the installation of more powerful lasers and larger optics.

He added that further “tweaks” will boost the sensitivity of the equipment by another factor of three, effectively meaning that the interferometer will be able to “listen” three times further into the universe. Extrapolating to three dimensions, it will mean that LIGO is able to capture signals relating to similarly cosmic events from a volume 30 times what is currently possible.

Thorne also expects more gravity wave signals to be captured soon, saying: “[We] ought to see some more over the coming year. There is going to be a huge richness of gravitational wave signals in LIGO.”

Since September, the LIGO team – which involves key contributors from the UK, Germany and Australia as well as the US wing – has been checking all other possible reasons why the same signal might have been picked up at both sites in error.

Asked whether the result, coming so soon after the facility upgrade, initially seemed “too good to be true”, Reitze said: “Absolutely, I couldn’t believe it!”

The LIGO team will have been especially mindful that a previous observation of what had seemed to be gravitational waves turned out to have been caused by intergalactic dust, and the possibility that such a signal could have been a deliberate “injection” – a kind of false alarm sometimes used to check whether systems of response at the large facilities are working properly.

But after all those checks and eliminations, it seems only one possibility remained: that the September 14 signal was indeed that of a gravitational wave sweeping past Earth, its space-time warping effect caused by a collision between two black holes that released the equivalent of three solar masses of energy, 1.3 billion years ago. “It was a gift of nature,” Gonzalez reflected.


LISA: “LIGO in space”
While the LIGO team will continue to search for gravitational waves in the US with their upgraded equipment, other facilities that will be capable of extending the gravitational-wave “spectrum” beyond the millisecond scale of LIGO are in the pipeline.

Chief among those is “LISA”, the laser interferometer space antenna. Once fully constructed, it will have an interferometer arm 5 million kilometers long, and be able to listen out for gravitational waves with much lower frequencies that the one “heard” by LIGO. Also based on state-of-the-art photonics technology, it should be able to observe different kinds of cosmological phenomena.

LISA, originally a collaboration between NASA and the European Space Agency (ESA), faced a major setback in 2011 when NASA decided to pull out of the project due to budget constraints and cost overruns.

However, the ESA has continued to back the mission, and in December 2015 it launched the “Pathfinder” test stage, designed to determine whether in fact it will be possible to perform the kind of picometer-resolution distance measurements that will be needed to observe the low-frequency gravity waves.

Eventually, LISA is set to comprise a constellation of three spacecraft flying in formation, millions of kilometers apart. Each will carry two test masses that will act as mirrors, reflecting a laser beam emitted by one of the other spacecraft. 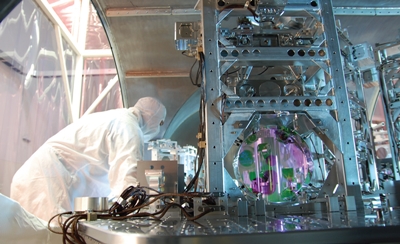 LIGO’s optics
LIGO's optical system essentially consists of lasers, a series of mirrors, and a photodetector. The heart of LIGO is its 200 W laser, created with four amplification steps that also refine the emission wavelength to an unprecedented level of precision.

The seed of that laser is a 4 W, 808 nm laser diode. The 4 W beam passes through a non-planar ring oscillator (NPRO), emerging with a power of 2 W at the conventional diode-pumped solid-state laser wavelength of 1064 nm.

Stage three of the amplification boosts the 2 W beam to 35 W. The fourth amplifier stage is a high-powered oscillator (HPO), which raises the power to 200 W.

But this is no ordinary solid-state laser. What emerges is said to be the most stable laser ever developed at this wavelength, a critical attribute for detecting gravitational waves.

Meanwhile LIGO’s mirrors are described as the highest quality available, both in terms of material and shape. Made of very pure fused silica, they absorb just one part in 3 million from the 1064 nm light that strikes them – meaning almost no heat is transferred. 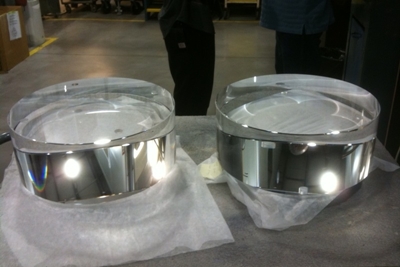 That is also crucial because any laser warming could alter the shapes of the mirrors enough to make the interferometer unable to distinguish a gravitational wave from local environmental noise.

LIGO’s Rainer Weiss, the scientist and engineer from MIT who is credited with doing more than anybody else since the 1970s to realize the interferometer facilities as practical observatories, explains that the LIGO system features four suspended mirrors deigned to damp any vibrations.

The mirror surfaces are polished to a precision of just a handful of atomic layers, which is critical because, after all of the reflections the laser in each arm travels around 1600 km before being recombined with its reference beam and directed to the photodetector. Maintaining the stability and purity of the laser light is said to be the biggest single challenge at LIGO.

Although Kip Thorne said that the upgraded LIGO is still being tweaked to reach maximum performance, it is clear that the system is close to its performance limits. On its web site, LIGO states:

“This design, with modest enhancements after it enters scientific use, should take this interferometer architecture to its technical endpoint; it is as sensitive as one can make an interferometer based on familiar technology: a Fabry-Perot Michelson configuration with external optical readout using room-temperature transmissive optics.”