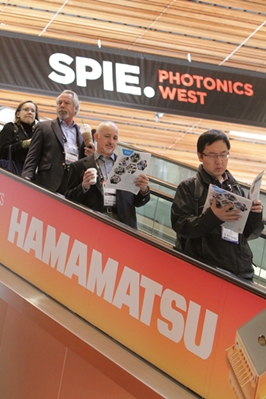 The forthcoming Photonics West conference and trade exhibition will host a special meeting where laser companies that are being sued by a patent troll can discuss defense strategies together.

Unibeam Photonics, which was established less than a year ago in the trolling heartland of Plano in eastern Texas, has targeted 27 defendants so far. Among them are some of the biggest and best-known commercial names in the photonics sector, including IPG Photonics, Rofin-Sinar subsidiary DILAS, and the JDSU spin-off Lumentum.

The patent in question, filed by Douglas Goodman from Polaroid back in 1998, describes a way to combine light beams in an optical waveguide. However, any invention in the patent has been described by those involved as "old technology".

Although Unibeam has not filed any additional documents with the Eastern District of Texas court in Marshall since early December, anybody involved in the case is being invited to convene at the InterContinental Hotel – adjacent to the Moscone Center in downtown San Francisco – during Photonics West.

Organized by Uri Abrams from PD-LD, one of the laser firms targeted by Unibeam, the meeting is set to take place between 9.40am and 11am on Wednesday, February 17, in the InterContinental’s Ballroom C.

Legal expertise
Abrams says that the meeting will allow the various companies involved to discuss joint defense ideas or actions, and create a platform for collective communication. When the Unibeam lawsuits were first filed, the PD-LD president said that the most effective way to defeat trolls was usually to combine resources in the form of a class-action defense and challenge the validity of the patent in question.

“In that event you force the troll to defend and validate the inventions claimed in a patent that's not theirs,” he said in December. “Not being the original inventor, the troll is always in a weak position and can’t prevail in the technical argument he may not have a background in.”

Intellectual property experts Joe Condo and Michael Bonella from Philadelphia-based legal firm Condo Roccia Koptiw, LLP, will take part in the San Francisco meeting. They will be on hand to discuss the Polaroid patent and answer any joint or individual defense strategy related questions that defendants may have.

For more information on the meeting contact Abrams at PD-LD.

• This year's Photonics West event features an extensive industry-focused program including updated market analysis reports, hundreds of new product launches, the Startup Challenge pitch contest showcasing ideas from aspiring entrepreneurs and much more. Over 1,300 companies are taking part in the BiOS and Photonics West exhibitions, while most of the industry events are accessible with free registration, in advance or on site. For the full line-up of industry events click here.