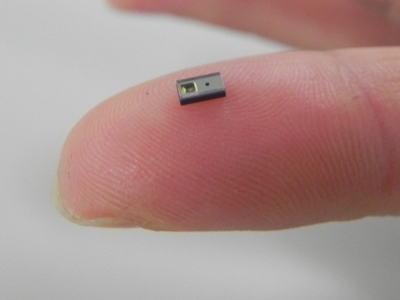 Engineers at the Japanese electronics and materials company Kyocera have developed a tiny optical sensor for measuring blood-flow – and are investigating wearable technology applications ahead of a planned commercialization in 2018.

Based around a laser diode and photodiode incorporated within a single ceramic package, the Doppler sensor is just a millimeter high, 1.6 mm long and 3.2 mm wide.

Potential applications include monitoring stress levels or preventing dehydration, heatstroke and altitude sickness, all of which can be indicated by changes in blood-flow volume.

Sampling soon
Kyocera, which recently acquired the Japanese element of the Melles Griot photonics business from IDEX Corporation, says that it is planning to offer samples of the sensor module from April, and aiming for full commercialization within a year.

The company is looking to target the fast-growing market for wearable healthcare technologies, and quotes a study compiled by analyst firm Tractica suggesting that global shipments of such devices will balloon from 2.5 million this year to nearly 100 million by 2021.

Its sensor works when in direct contact with a part of the body where blood flows through capillaries that are close to the surface of the skin – for example the earlobe, fingertip or forehead.

With a sufficiently wavelength-sensitive detector, it is possible to capture laser light Doppler-shifted by the movement of red blood cells to a slightly different frequency. “The new sensor utilizes the relative shift in frequency (which increases as blood flow accelerates) and the strength of the reflected light (which grows stronger when reflected off a greater volume of red blood cells) to measure blood-flow volume,” says the Japanese firm.

$18BN market
Interference between the Doppler-shifted light and photons simply reflected back off of the wearer’s skin can also be detected in the form of optical “beat” signals.

At such a tiny size and said to feature a power consumption of only 0.5 mW, the device ought to be easily integrated into smart phones or wearable devices.

According to the Tractica report, from April this year, the healthcare wearables sector will account for an annual market worth some $18 billion in 2021. As well as the now-familiar fitness trackers and watches, the analyst sees opportunities in the treatment of chronic disease, remote patient monitoring, care for the elderly, and so-called “wellness programs”.

Emerging categories include connected wearable patches, pain management devices, wrist devices, and posture monitors, among many others, it predicts.