French clusters with joint skills in photonics and digital will enable Alpha-RLH to innovate for defense and more. 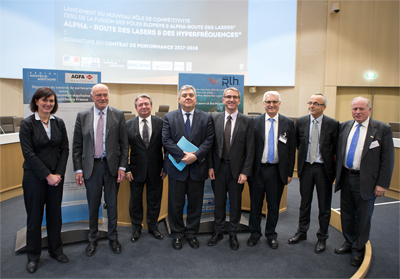 The merger follows the French Government’s 2016 reorganization of the country’s regions, which has seen Aquitaine (the home of Route des Lasers, centered on Bordeaux) become Nouvelle Aquitaine, now encompassing Limousin and Poitou-Charentes, including the territory of Elopsys, based around Limoges.

Cluster members have contributed to economic growth and development in the Nouvelle Aquitaine region (which has a population of 5.8 million) by directly generating almost 6,500 highly skilled jobs and indirectly creating a further 20,000. In its launch statement, Alpha-RLH said that it sees “strong potential to increase membership by 20–30% by 2018”. The expanded cluster has already identified more than 250 eligible firms that could benefit from the expansion, through greater efficiency of “scale and synergy”.

“With our combined expertise and deep understanding of photonics, lasers, microwave and digital technologies that are deployed by most industrial firms, Alpha-RLH has a major competitive advantage,” said Hervé Floch. “We are now in a stronger position to accompany the rise and structural growth of the cutting-edge photonics sector at regional and national levels.”

He added, “The new cluster is better equipped to meet all the challenges to successfully take a project from concept to end-product. We have the qualities, attributes and resources to become the benchmark for microwave and photonics in France and draw greater international business interests to the Aquitaine region.”

In the next two years, Alpha-RLH said it expects to attract at least half a dozen companies from other regions in France and abroad. Internationally, it plans to engage a representative in Japan in addition to those currently operating in China and the US. The cluster will continue driving efforts to encourage members to participate in key international trade events such as BIOS Photonics West or EUMW (European Microwave Week), as well as join networks, such as la French Tech.

At its launch, Alpha-RLH said its key objectives were: to make the Aquitaine region more attractive to industrial firms by proactively setting up inter-sector development projects; and to help SMEs drive exports and grow to medium-sized companies, all within a secure economic environment.

According to a study on the photonics industry (French), conducted in 2014 by France’s Directorate-General for Enterprise (DGE), the European photonics sector generated €77 million ($81.8 million) in sales revenue, of which France represented €10 million ($10.6 million).

Although the market for microwave technologies is mature, growth does continue with innovation taking place in numerous areas. The technology is used by consumers on a daily basis, for instance in data transmission (mobile networks Wi-Fi, 3G, 4G and LTE). In Europe, the microwave market represented £23 billion (approx. €29bn, $29bn) in 2014. Leading players are France, Germany and the UK. The development of 5G is seen as a key growth driver.