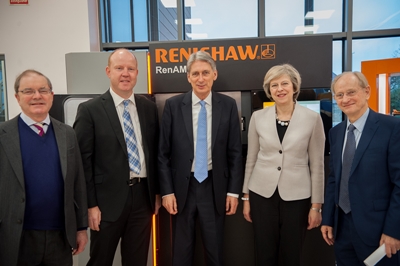 Among the industrial partners with involvement in one or more of the hubs are metrology specialist Renishaw, the epiwafer foundry IQE, gallium nitride optoelectronics firm Seren Photonics, and the optical communications component maker Oclaro.

And although none of the six hubs is overtly photonics-related, their focus on technologies including additive manufacturing, compound semiconductors, targeted biomedicine and advanced metrology are all areas where photonics plays a key role.

Industrial strategy
Funding for the six hubs comes via the Engineering and Physical Sciences Research Council (EPSRC), the source of much financial support for photonics research and development in the UK. One of its largest current activities is the National Quantum Technologies Programme.

Under government plans, the EPSRC is set to come under the jurisdiction of the new overarching funding body known as Research Councils UK (RCUK), which also encompasses Innovate UK, the funding mechanism used to support technology development that is more closely targeted to perceived market needs.

Following last month’s revelation of a significant boost to research and innovation spending in the government’s “Autumn Statement” budget plan through 2021, the EPSRC’s latest announcement is one of the earliest signs of what kind of research that funding is likely to support.

Jo Johnson, the UK government's minister for universities and science, emphasized the industrial connection, saying: “This investment will lay the foundations to allow industry and our world-leading universities to thrive for years to come and is exactly the type of project that our upcoming industrial strategy will look to support.”

Renishaw support
The six hubs have already attracted participation from scores of industrial partners, who have collectively committed an additional £87 million in resources to the various projects.

And while for example the Cardiff-led hub focused on compound semiconductor development is not in itself a new development, EPSRC chief executive Philip Nelson reiterated the growing industrial and economic angle, saying:

“Some of these new hubs will build on the solid foundations of earlier Centres for Innovative Manufacturing while some, like the hub at the University of Sheffield, are completely new ventures that have strong links with industry and organisations such as the Advanced Manufacturing Research Centre. EPSRC is pleased to be at the forefront of the drive to keep the UK a prosperous and productive nation.”

One company that is closely involved in several hubs is Renishaw, which is best known for its metrology expertise but is also developing laser additive manufacturing tools.

Also involved in MAPP (led by Iain Todd from the University of Sheffield) are optics giant Zeiss and the synthetic diamond optical component maker Element 6. Zoom and anamorphic lens firm Cooke Optics joins Renishaw, Zeiss and microscope company Taylor Hobson in the advanced metrology effort led by principal investigator Jane Jiang - whose University of Huddersfield professorship is sponsored by Renishaw and the Royal Academy of Engineering.

Cardiff’s Peter Smowton is heading up the compound semiconductor effort, which has also garnered support from the likes of Selex, Lockheed Martin, Toshiba Research Cambridge, Philips and Umicore.

Data center report: risk to UK’s financial services sector
• A new report by the UK’s Knowledge Transfer Network (KTN), part of Innovate UK, has warned that there is a “significant risk” that elements of the UK’s huge financial trading sector could migrate elsewhere unless stronger links are forged between developers of hardware for data centers and financial services providers.

“As data centre (DC) equipment currently deployed in London is generic and links to next-generation technology are poor, there is little from a hardware perspective to keep current trading volumes in London other than the clustering effect.

“Should better DC facilities become available at other trading centres, there is the real risk that some forms of trading, for example high-speed trading and foreign currency trading, could move offshore, putting at risk a significant fraction of the £21 billion the UK receives in tax receipts from the financial sector and the 2.1 million jobs in the financial services and related industries.”

And in his conclusion Lincoln writes: “Without developing these links within the UK, there is a significant risk that other global financial trading centres will develop improved DC hardware first, risking the migration of financial trading to outside the UK.

“However, if successful, a real and effective link can be made between the UK’s eminent financial services sector and its hardware innovation and manufacturing base.”