Fluorescence is a useful tool for investigation in experimental biology and it has now become easier to exploit, following the work of a group of University of Chicago scientists. They have economically converted a standard wide-field inverted microscope into a spatially-selective, spectrally-resolved device, which allows researchers to determine - simply and cheaply - the spectrum from specific structures within a sample.

“The bulk of the work on this new tool was done by graduate students during their first semester,” said Adam Hammond, curriculum director and senior lecturer in the Biophysical Sciences program at the Gordon Center for Integrative Sciences. “The purpose of their instrumentation is to observe the spectrum of light that comes from part of a sample on a microscope but not the entire sample.” The work is described in Review of Scientific Instruments (AIP Publishing).

Hammond added, “We wanted to be able to ask, what is the spectrum from a specific structure within a sample. This is not a new desire and instruments that can do it exist, but none, as far as I know, as simply as ours.”

Peter Dahlberg, lead author of the article who is now at Stanford University, California, worked on developing a selective excitation microscope during his first undergraduate year. “Subconsciously, I think the idea started then,” he said. “Why not do the same thing, but in reverse?” 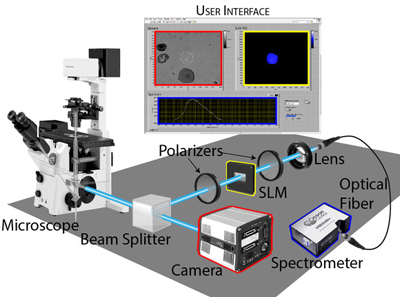 Spectroscopy of selected regions of a microscope sample.

The spatially-selective, spectrally-resolved microscope splits the light from a sample. Half is directed to a camera for conventional image processing while the other half is directed towards a spectrometer. Before the latter part reaches the spectrometer, it passes through a set of optical components that allow the operator to select a portion of the image while blocking the rest.

“The optical components consist of a spatial light modulator placed between crossed polarizers,” said Hammond. “SLMs are common components now, with at least three fitted in modern digital projectors. They feature an array of pixels that can manipulate the phase of light passing through them.”

“We focus the image from the sample onto the SLM and shift the phase of only those pixels from which we want to obtain a spectrum,” he said. “The shifted light passes through a second polarizer; everything else gets blocked. Then that light is collected and can be directed to any kind of optical instrument you choose. Currently, we send it to a small UV/visible spectrometer to achieve a full spectrum.”

The group describes its instrument as a “workhorse tool”, saying that its relatively simple concepts and components could easily be adapted for many different purposes and added to existing microscopes easily and inexpensively.

Hammond added that the instrument could also be used for absorbance measurements. “Often, the most important samples of interest are tiny and hard to create or purify, such as crystal forms,” he said. “It’s difficult to separate two types in sufficient quantities to fill a cuvette with one. But when you put the mixture on a microscope slide, it becomes easier. Crystals can be measured individually, as can cells that express variable chromophores. This possibility opens up a whole new investigation area, which was not part of our original plan. Another application of the new scope is the identification of individual microorganisms within a mixed sample by their absorbance fingerprint."

So what’s next for the Chicago researchers? Hammond commented, “By using a pulsed excitation source, the fluorescence lifetime of a probe could be measured from a specific region of interest. One interesting potential application is in neuroscience for resolving single action potentials with dyes that are sensitive to membrane potential. Fluorescence lifetime measurements offer an advantage over direct fluorescence measurements because they’re independent of the concentration of the probe.”