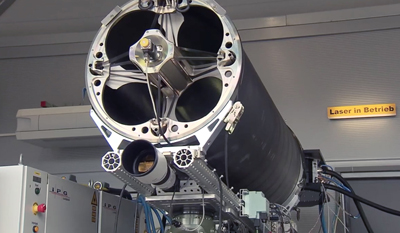 Powered by IPG fiber lasers, the MBDA effector can achieve an outputs of up to 100,000kW.

The company says the tests, which were carried out between October 4th to 14th, “mark the next step in progressing from technology to product". In this recent series of trials, the system was tested under real environmental conditions for the first time.

The company explained that the laser effector is a weapon that can be integrated into various command & control systems. It uses pre-acquisition data from existing sensors and with such data, the laser effector locks on to a target, tracks it then destroys it. MBDA’s new laser effector features a 360-degree beam guidance system including an illumination laser and tracking system. 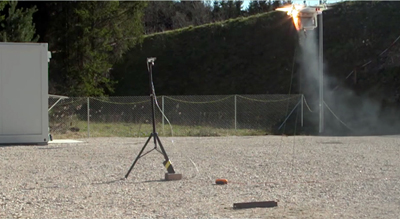 Tests were conducted under a variety of weather conditions including rainstorms.

Thomas Gottschild, Managing Director of MBDA Deutschland, commented, “These successful tests demonstrated that our laser effector has achieved a high degree of technological maturity. This puts us in a leading position in the development of such weapons.”

The primary purpose of the test was to review the beam guidance and tracking system, with a simulated engagement of airborne targets. In the exercise, the targets were preset, scanned with the laser target illuminator, and an aim point was held on the target for an extended period. The quadcopter, serving as the airborne target, performed a variety of often highly dynamic manoeuvres at a variety of ranges.

Despite adverse weather conditions, including heavy rain and storms, the system tracked all the targets involved in the trials. During night trials, the demonstrator proved capable of acquiring and tracking targets even under conditions of poor visibility. In other experiments, the laser team simulated a defense against a swarming attack, which required rapid switching between targets approaching from different directions. 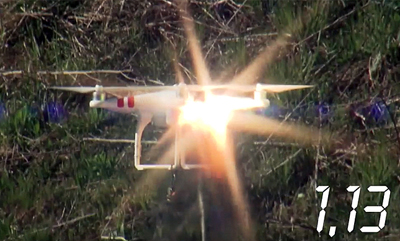 Game over: the quadcopter is destroyed after a few seconds exposure to the effector beam.

An MBDA Deutschland spokesman commented, “With its novel optics, this system can acquire a target in a 360-degree operational arc, track it and then destroy it reliably and precisely with the weapon's powerful laser beam.

"Due to the scalability of laser power," he continued, "a variable effect can be realized from dazzling to permanent destruction of the threat. The system's sophisticated mirror optic makes it easy to upgrade the system to higher laser power levels than those currently available today. This laser effector therefore has enormous future potential.”

He added, “Laser weapons have the potential for being deployed wherever an immediate risk exists at very close range: for instance the protection of military infrastructure, checkpoints, convoys or for naval self-defense. 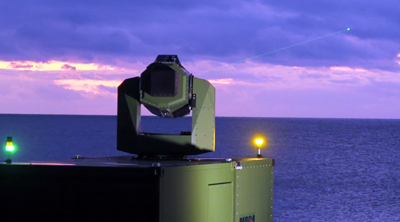 Since 2008, MBDA Deutschland has developed and tested a high energy laser weapon demonstrator against a broad range of threats, including rapidly maneuvering, highly dynamic targets. The technical concept of MBDA Deutschland is based on providing the entire laser power from single effector by coupling multiple laser sources (using "geometric coupling").

MBDA Deutschland’s parent group, MBDA, is an integrated defense company that provide missiles and missile systems for each branch of the armed forces. A multi-national group with 10,000 employees working together across France, Germany, Italy, Spain and the UK. Offices are also set up in USA. MBDA is jointly held by three key shareholders: Airbus Group (37.5%), BAE Systems (37.5%) and Leonardo Finmeccanica (25%).