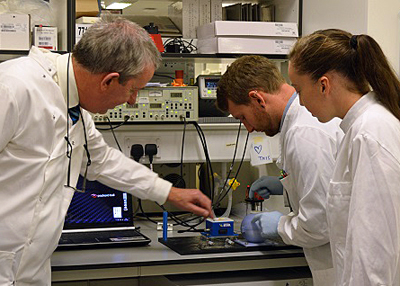 Medical scientists at the University of St Andrews have won a prestigious international award for a photonics-based breakthrough that they say could help the fight against antibiotic resistance. The UN has identified the growth of antibiotics-resistant bacteria as “a major threat to global health”

The Orbital Diagnostics team at St Andrews have developed an optical device called the Scattered Light Integrated Collector (“SLIC”) to reduce the time taken to test bacteria for resistance. Current testing methods often take 24 hours to produce a result, but the SLIC team can produce a similar result in around 20 minutes.

The new tool aims to help patients receive the necessary treatment more accurately and more often. This will reduce risk of antibiotic resistance by helping ensure bacteria are not exposed to random antibiotics unnecessarily. At an award ceremony held in November, at the Royal Society in London, members of the St Andrews team were presented with a prestigious Longitude Prize Discovery Award.

The prize – described as a “small seed grant” – will help the team develop a device that can challenge for the coveted Longitude Prize, a challenge with a £10 million prize fund to reward a point of care diagnostic test that helps solve the global problem of bacterial antibiotic resistance.

Team leader Professor Stephen Gillespie, the Sir James Black Professor of Medicine at St Andrews, said, “Our very sensitive device detects bacteria in very small numbers. This means when they grow in the presence of antibiotics, we can observe that quickly. Conventional tests take up to 24 hours – but for some bugs we can now do the same job in less than 20 minutes. 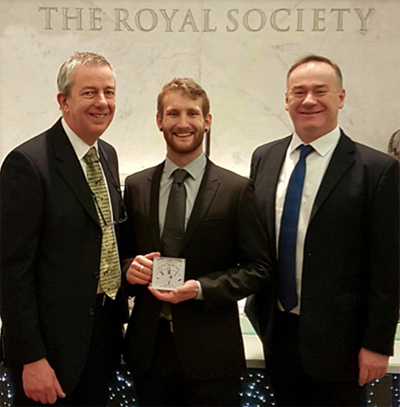 “At the moment this promising test can only be used in the laboratory; the challenge is to turn it into a test that coul be used in a doctor’s surgery or a pharmacy.”

Dr Robert Hammond, co-inventor and senior scientist, said, “We aim to develop SLIC to enable a person with a suspected urinary tract infection, for example, to give a sample to a practice nurse or pharmacist – then within two hours be given an antibiotic prescription knowing that the infecting bacteria are susceptible. This will be faster and better for the individual. It will mean that fewer unnecessary prescriptions will be issued, reducing chances that bugs will develop resistance.”

The Orbital Diagnostics team is also supported by Scottish Enterprise, which contains to form a company that will take the SLIC device to market.

Eleanor Mitchell, High Growth Ventures Director at Scottish Enterprise, said, “This Longitude Prize Discovery award is fantastic recognition of Orbital Diagnostics’ progress in developing the SLIC, which has significant global market potential. Scottish Enterprise is delighted to be supporting the team to commercialize this emerging technology which exemplifies the strength of innovation in Scotland’s healthcare sector.”

Professor Stephen Gillespie leads the infection group at the University of St Andrews. A practising clinical microbiologist, he is one of the Chief Investigators of the PanACEA consortium, focusing on various aspects of tuberculosis drug development. His infection group studies molecular mechanisms of resistance and model systems to measure the fitness deficits found in resistant strains and investigates respiratory pathogens.