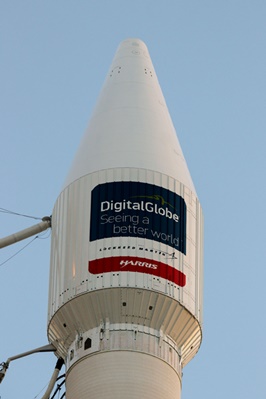 DigitalGlobe’s “WorldView-4” (WV4) high-resolution imaging satellite has reached orbit successfully, after launching aboard an Atlas V rocket from Vandenberg Air Force Base in California on November 11.

The satellite, built by Lockheed Martin and featuring CCD sensors custom-made by Phoenix-headquartered ON Semiconductor, is expected to more than double DigitalGlobe’s ability to collect imagery with a ground resolution of 31 centimeters.

Colorado-based DigitalGlobe said that it had acquired signals from WV4 indicating its “proper position and health” just 45 minutes after launch.

Wildfire delay
As the fifth active satellite in DigitalGlobe’s portfolio, WV4 will be used in security, humanitarian and other applications like capturing up-to-date imagery in the immediate aftermath of natural disasters.

Harris Corporation developed the “SpaceView 110” on-board imaging payload, which is also said to be capable of providing 1.24 meter multispectral resolution from the craft’s low-Earth orbit altitude of 617 kilometers.

After nearly a decade in development, WV4 had been scheduled for launch in September. But that was postponed because of a wildfire close to the Vandenberg base that took firefighters a week to get under control.

Aside from its state-of-the-art resolving power, the SpaceView 110 offers a broad spectral range across the visible and near-infrared, which Harris says is of particular use to agricultural organizations to differentiate between foliage types and determine vegetative health.

“For disaster and emergency responders, short-wave infrared (SWIR) imaging capabilities can help teams see through smoke to determine the hot spot of a fire to effectively deploy resources,” adds the firm. “For oil and gas companies that need to explore difficult-to-reach parts of the world, multispectral imaging can be put to use to find natural resources in remote areas.”

Able to scan at a rate of 24,000 lines per second, the payload could for example generate an image spanning from London to Paris in just 45 seconds.

“This feature enables users to understand what is happening over a long distance as soon as possible,” Harris states in its SpaceView 110 data sheet.

Aside from the sensors, one of the critical elements of the payload’s optical design is the 1.1 meter diameter primary mirror, whose extraordinary smoothness ensures that the images it captures are sharp.

The firm’s first two satellites – Ikonos and QuickBird – were both decommissioned last year. WV1, launched back in 2007, offers 0.5 meter resolution, and the resolving power steadily improved with the launches of GeoEye-1 in 2008, and WV2 in 2009. 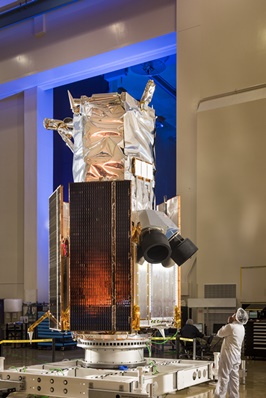 WV3, which launched in 2014, offers the same 31 centimeter resolution as the latest payload, and is expected to operate through 2026 alongside WV4.

Those images can also be provided to end users in as little as 20 minutes, while the difference in resolution is critical. At the 1 meter image resolution, for example, vehicles cannot be identified as tanks. But with 30 centimeter resolution tank turrets and barrel shadows can be seen.

According to the company’s latest investor presentation its biggest customer is the US government, which has accounted for nearly two-thirds of sales revenues over the past year.

Other clients listed include the blue-chip technology firms Google, Microsoft, Facebook, and Apple, as well as energy giants Shell, BP, ConocoPhillips, and Chevron.

DigitalGlobe has also signed up to a joint-venture with Saudi Arabian partners that is expected to result in a constellation of at least six more satellites offering sub-meter imaging resolution.