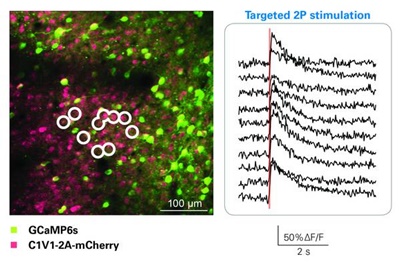 Microscope company Bruker has commercialized an all-optical module for stimulating and imaging multiple neurons in neural networks, targeting the fast-growing and high-profile market for optogenetics research.

Unveiled at the annual meeting of the Society for Neuroscience in San Diego, California, this week, the “NeuraLight 3D” equipment is a modular extension of Bruker’s existing "Ultima" multiphoton microscopes.

Adding the new holographic module means that researchers will be able to stimulate many different brain cells simultaneously, in a programmable three-dimensional volume and at a switch rate of up to 500 Hz.

Spatial light modulator
At the heart of the kit is a key piece of photonics hardware – a proprietary spatial light modulator (SLM) that Bruker claims will enable mapping of neural networks on an unprecedented level in terms of stimulation frequency and spatial resolution, with both in vivo and in vitro experimental models.

Coupled with a set of 6-millimeter galvanometers, the SLM is able to create multiple stimulation points, in either spiral or rectangular scan patterns, and project them in a three-dimensional volume.

It means that diffraction-limited stimulation patterns targeting individual synapses or groups of synapses can be produced, allowing researchers to probe neural connectivity and signalling pathways – and to automate some elements of their work.

“This significant breakthrough in 3D optical stimulation, in conjunction with multiphoton microscopy, was achieved in close collaboration with leaders in neuroscience research at Stanford University, Columbia University, and University College London (UCL),” announced the Massachusetts-headquartered company.

One of those partners is UCL’s Michael Hausser, whose group’s work is focused on understanding the cellular basis of neural computation in mammalian brains – and more specifically how neuronal dendrites and neural circuits code information.

Available as an optional extra, the NeuraLight 3D module connects to one of the optical ports of an Ultima microscope.

“The number of targets that can be activated and observed is limited only by the peak power of the laser used for stimulation,” Bruker says.

Closing the loop
In a webinar describing the new technology and its potential applications, Adam Packer – one of Hausser’s UCL colleagues – explained that a key advantage of the two-photon approach is the ability to precisely stimulate individual neural cells, something that has been difficult to achieve with traditional optogenetics techniques.

In addition, he said that the SLM acts like a programmable beam splitter, meaning that researchers can maintain that precision while stimulating several different neurons at once, something that yields a much closer approximation to real brain activity.

“The brain doesn’t really work one neuron at a time,” Packer explained. “We want to synchronously activate as many neurons as possible.”

In experiments on mice fitted with optical windows in place of part of their skulls, ten different neurons could be activated simultaneously with the SLM, allowing the researchers to conduct experiments revealing how those neurons behave during certain activities or under specific types of external stimulation – like having their whiskers tickled in a particular way.

Those same neurons can then be photo-stimulated in mice trained to respond in certain ways to the external stimuli, meaning that researchers can “close the loop” between behavior and neural activity.

• Among the other groups to have collaborated with Bruker on the new kit is Rafael Yuste’s team at Columbia University in New York. Yuste is the co-director of Columbia’s Kavli Institute for Brain Science.

At the forthcoming SPIE Photonics West event Yuste will be chairing a special “neurotechnologies” plenary session alongside David Boas from the Harvard Medical School. This session is scheduled to take place Sunday January 29 from 3.30 pm.