Poseidon project develops new scanner to identify bacteria in under one hour. 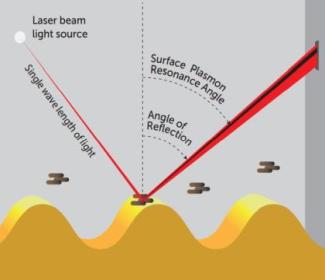 A project supported by the Photonics Public Private Partnership under the European Commission's Horizon 2020 program is developing an optical sensor intended to spot the presence of Legionella bacteria in under one hour - a process said to normally take up to ten days of cultivation and analysis.

The Poseidon (from "plasmonic-based automated lab-on-chip sensor for the rapid in-situ detection of Legionella") consortium has received funding of over €4 million in support of its research into the use of surface plasmon resonance (SPR) phenomena in a fully automated platform for fast optical detection of L. pneumophila pathogens.

SPR effects involve the excitation of surface plasmons, and the resulting changes made to the behavior of light very close to the surface of a sensor. Foreign species present at the right location reveal their presence by affecting this behavior in identifiable ways. Poseidon aims to develop a platform in which a refracted laser beam uses this effect to spot the presence of the bacteria, allowing fast and inexpensive detection from a small sample without the need for use of a labeling protein

The project's design involves polarized beams of light hitting a metal film at the interface of two media. According to the project's technical material, charge density oscillation of surface plasmons at the metal film reduces the intensity of reflected light, and the scale of the reduction depends on the substance on the metal at the interface. Information gathered from the refracted light can then be analyzed, and the presence of a pre-programed pathogen confirmed - an unambiguous detection of the bacteria in situ.

This is said to provide an extremely sensitive and versatile tool for miniaturized label-free sensing platforms able to be integrated into lab-on-chip systems, for potential applications in environmental monitoring, biotechnology, medical diagnostics, drug screening, food safety and security.

Rapid readout
"Detection and investigation of viruses, bacteria and eukaryotic cells is a rapidly growing field in SPR biosensing, but the detection has only been achieved in laboratory settings," commented Poseidon's scientific coordinator Roberto Pierobon of Italy's Protolab. "With our unique innovative SPR sensing architecture, Poseidon provides reliable measurement readouts of Legionella bacterial cells that are driven and entrapped on a custom sensing surface specifically designed with opportune positive and negative controls."

A rapid readout is one key goal, and Poseidon's optical detection could provide an inexpensive early warning system to monitor Legionella in air-conditioning units. The hope is to reduce the time involved in a positive identification from ten days to less than one hour, although in certain scenarios and at particular times of year, a timescale measured in minutes is the project's ultimate aim.

"Cells remain intact throughout the whole fluid transportation system in the device, and do not adhere to the fluidic piping and microfluidic channels," noted Pierobon. "Virtually all of the bacteria cells in the sample are delivered to the sensing unit, giving extremely high sensitivity and specificity."

Poseidon will also act as an means to investigate the use of SPR sensors in general as extremely sensitive and versatile tools for miniaturized label-free sensing platforms, particularly integrated into lab-on-chip systems. Potential applications for such architectures include environmental monitoring, biotechnology, medical diagnostics, drug screening, food safety and security.