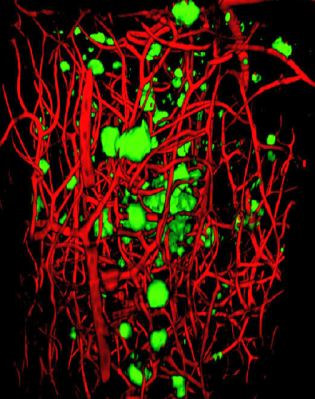 A clearer view of Alzheimer's

The difficulties of imaging relatively deep inside biological tissues are considerably simplified if the tissues can be coerced to become more transparent; but doing so successfully has not proven to be simple at all.

In principle the transparency process - usually called optical clearing - involves leveling out the discrepancy in refractive index (RI) between the different organic components present, often by replacing extracellular cytoplasm with a material having a higher RI.

This reduces the overall scatter of light by the tissues, potentially making organic material authentically translucent.

However, the operation can be complex and subject to multiple constraints, depending on whether the process is undertaken in vivo or ex vivo, as well as considerations of toxicity and structural damage.

Now a team at Japan's RIKEN Brain Science Institute has developed a new optical clearing process that could overcome some of these difficulties, and used it to illuminate 3D-brain anatomy at high resolutions. The work was published in Nature Neuroscience.

The technique builds on earlier work by RIKEN team leader Atsushi Miyawaki, in which a urea-based optical clearing solution called Scale was infused into the target tissues. After further experimentation the team has now added sorbitol to the recipe, creating a new version named ScaleS, and applied it to brain tissues.

"By combining sorbitol in the right proportion with urea, we could create transparent brains with minimal tissue damage," commented Miyawaki. "It can handle both florescent and immunohistochemical labeling techniques, and is even effective in older animals."

The newly transparent brain samples have been stored in ScaleS for more than a year without damage - a critical consideration, if the tissues are to remain suitable for the micron-thick slicing operations necessary for more detailed analyses.

"The real challenge with optical clearing is at the microscopic level,” said Miyawaki, “In addition to allowing tissue to be viewable by light microscopy, a practical solution must also ensure accurate tissue preservation for effective electron microscopy."

A technique able to reveal the plaques in 3D should prove extremely valuable, since they are typically undetectable using 2D imaging.

"Clearing tissue with ScaleS followed by 3D microscopy has clear advantages over 2D stereology or immunohistochemistry," commented Miyawaki. "Our technique will be useful not only for visualizing plaques in Alzheimer's disease, but also for examining normal neural circuits and pinpointing structural changes that characterize other brain diseases."